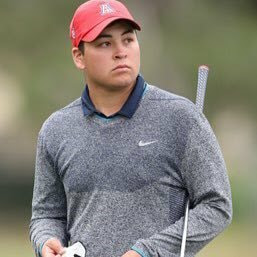 Walking the dog on Sunday morning, Sharon and I swung by the driving range and the first tee at Ancil Hoffman. We walked up just as they were announcing David Laskin. We got a chance to see him tee off for the second round of the Memorial Amateur Championship. Later on Sunday while I was out for a long run, David was on the 15th green. I stopped to watch him putt and got a chance to briefly visit with Alan and Julie.

After the first two rounds, David was in second place and one stroke behind the leader. As a result, he teed off in the last group on Monday. Sharon and I walked over to the Ancil Hoffman clubhouse to watch him tee off. Alan and Julie, as well as our neighbors Mike and Jill, were also part of the gallery following the leaders. We ended up following David for five holes before we peeled off and headed back to the house. David ended up shooting a 75 on Monday and finishing tied for fourth.
By Heringer at 5/29/2017 11:59:00 PM