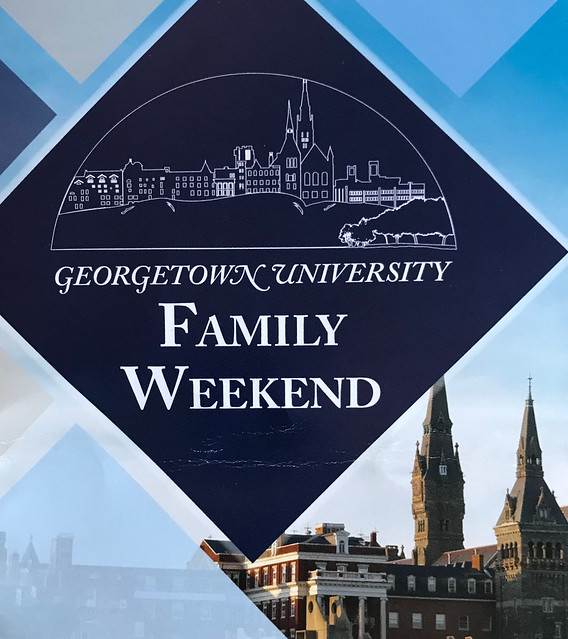 We had breakfast in the concierge lounge at the Marriott. After getting cleaned up, we caught a cab to Georgetown University. We met Jack for the 9:30 am Mass in Gaston Hall in Healy Hall. I was surprised how few people there were; I remember it as being packed last year. After Mass, the three of us walked to the reception in the Healy Family Center for donuts and coffee.

At this point, we said goodbye. I am actually coming back in three weeks and then Jack will be home for Thanksgiving in a little more than four weeks.

Sharon and I had a leisurely walk back to the hotel along P Street. The Marine Corp Marathon was going on in Washington DC. A number of streets in and around Rock Creek Park were closed.

After getting the room packed up, we had lunch at Cafe Deluxe (steak and tuna cobb salads). We had a late check-out of the hotel for 2:30 pm. We took an Uber SUV, a very comfortable suburban, to Dulles.

We caught a 5:20 pm United Flight direct from Dulles to Sacramento. We were on the ground a little early about 8:15 pm. Sharon's nephew Eric picked us up and we were home about 9:30 pm.

It was a great trip. We covered eight states, including Vermont, New Hampshire, Massachusetts, Connecticut, New York, New Jersey, Delaware and Maryland plus the District of Columbia. There were a few things that I would have done differently. I will try to do a trip summary in the next month.
By Heringer at 10/22/2017 11:59:00 PM