After a second night at the Birchwood Inn, we packed up, loaded the car and had a leisurely breakfast. We are continuing south. The plan for the day was another driving tour from the guide book. We followed the Litchfield Hills Loop.

We stopped in Norfolk. We walked through the beautiful Romanesque Revival library.

From there we headed to Lakeview. This area is home millionaires and movie stars such as Meryl Streep. Sharon saw a sign for a town called Sharon so we continued up the road. We stopped a took a number of pictures.

Getting back on path of the guide book tour, we stopped at the Limerick Race Track. Sharon wanted to stop there because Paul Newman had race there often. They actually let us in the facility and we drove around the infield and pit areas. 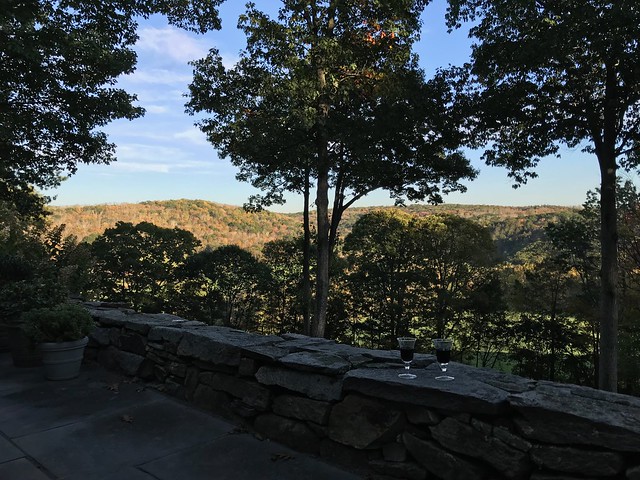 Driving through West Cornwall, we eventually stopped for lunch at the Fite N' Drum in Kent. From there we headed through Lake Waramaug to the Hidden Valley Inn. We got there about 2:00 pm, but the room wasn't ready yet.

Sharon wanted to visit antique stores as part of the trip. The town of Woodbury was billed as having over 30 dealerships and 20 stores along its historic main street. We headed there next. Unfortunately, the stores were spread over a couple of miles; they were not within walking distance. Additionally, some are closed. We ended up making five or six stops. It was a hassle from my perspective and somewhat of a bust from Sharon's perspective.

We ended up getting back to the Hidden Valley Bed & Breakfast about 4:00 pm. We are spending two nights. We unloaded the car and then took a bottle of wine and sat on the back den with our books. It is a great setting with a wonderful view of the valley. We have a very nice room: the blue master suite.

Originally, we were only going to spend one night. The next night we were going to head further south for one more night before the jump to Washington DC. After we booked the trip, the hotel for the last night was sold and we made a second night here. I am glad that we did...