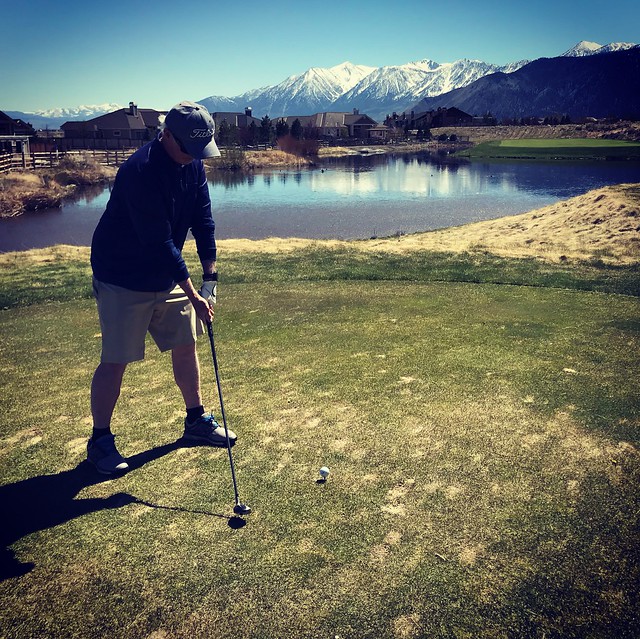 I left the house about 9:00 am. Taking Highway 50 to 89 to 88, I got to golf course about 11:45 am. There were a couple of construction stops on Highway 50. I got to the Genoa Ranch Course about 15 minutes behind Larkin. We played this course the first year we came to the tournament in 2010.

Rod started the day with a long putt contest at 12:00 pm. The group teed off in a shotgun start at 1:00 pm. Larkin and I played with Jon Carlson, Mike O'Malley and Abel Caro. All three met Rod through Chico soccer, particularly the team's 2017 trip to Sp@in, and were playing in the tournament for the first time.

This year's group was enormous. While in most of the previous years, the count was in the mid-twenties. Last year, there were 42 people in the tournament. This year, there were 60 people! The group included Gainsley, Rick, Art and Colin plus Borja and his brother-in-law Scott.

I was pleased with how I played. I didn't strike the play was well as I did in H@waii, but I shot a very liberally scored winter rules 105. I pared two holes and bogeyed six holes, but three putted six greens and four putted one green. The scorecard is here.

For the second year in a row, the group is staying at the Carson Valley Inn in Minden. I stayed at this hotel in a suite once in late 1991 with she-who-will-not-be-named.

Larkin and I spent some time in Rod's suite before we headed to dinner. We had dinner at the J.T. Basque Restaurant down street from the hotel. We had lamb chops with the family style meal.