Sharon and I wandered through Kamakahonu when we were on the Big Island for Becky's wedding.

Kamakahonu, the residence of Kamehameha I, is located at the north end of Kailua Bay in Kailua-Kona on the Island of Hawai'i. At one time the residential compound included 'Ahu'ena Heiau, the personal heiau (place of worship) of Kamehameha I, thatched houses for ali'i (chiefs) and women, an enclosing wall, Hale Nana Mahina'ai (the personal retreat of Kamehameha I) work sheds, storehouses, and other buildings. 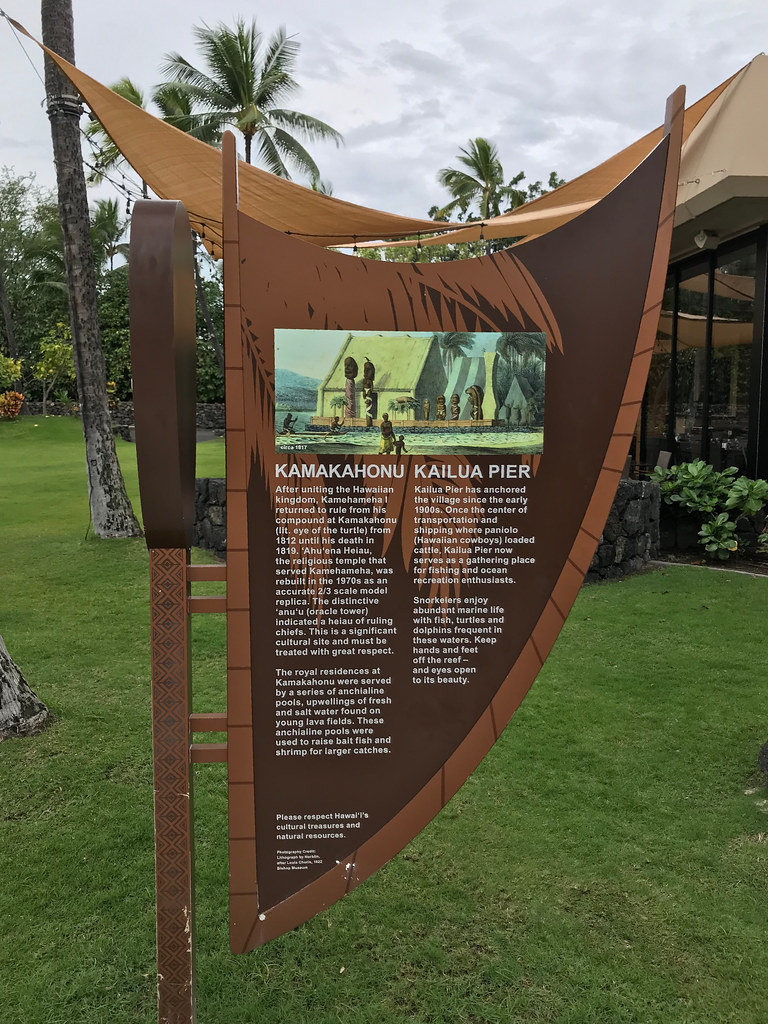 After uniting the Hawaiian kingdom, Kamehameha I returned to rule from his compound at Kamakahonu (lit. eye of the turtle) from 1812 until his death in 1819. Ahu'ena Heiau, the religious temple that served Kamehameha, was rebuilt in the 1970s as an accurate 2/3 scale model replica. The distinctive anu'u (oracle tower) indicated a heiau of ruling chiefs. This is a significant cultural site and must be treated with great respect.

The royal residences at Kamakahonu were served by a series of anchialine pools, upwillings of fresh and salt water found on young lava fields. These anchialine pools were used to raise balt fish and shrimp for larger catches.

Ahu'ena Heiau, the religious temple that served Kamehameha, was rebuilt in the 1970s as an accurate 2/3 scale model replica. 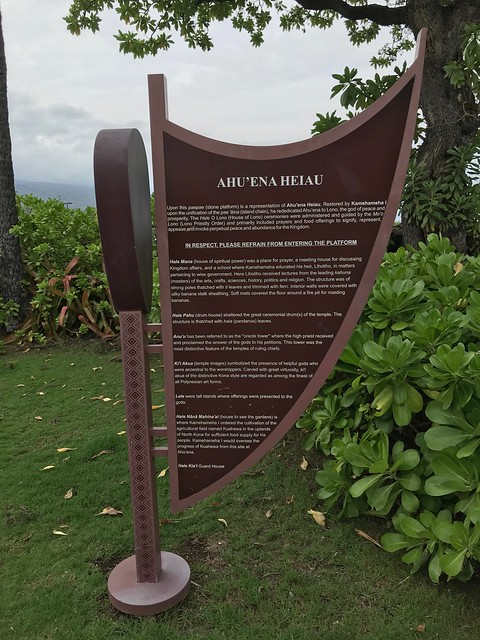 Upon this papa (stone platform) is a representation of Ahu'ena Heiau. Restored by Kamehameha I upon the unification of the pae'aina (island chain), he rededicated Ahu'ena to Lono, the god of peace and prosperity. The Hale O Lono (House of Lono) ceremonies were administred and guided by the Mo'o Lono (Lono Priestly Order) and primarily included prayers and food offerings to signify, represent, appease and invoke perpetual peace and abundance for the Kingdom.

Hale Mana (house of spiritual power) was a place for prayer, a meeting house for discussing Kingdom affairs, and a school where Kamehameha educated his heir, Liholiho, in matters pertaining to wise government. Here Liholiho received lectures from the leading kahuna (masters) of the arts, crafts, sciences, history, politics and religion. The structure was of strong poles thatched with ti leaves and trimmed with fern. Interior walls were covered with silky banana stalk sheathing. Soft mats covered the floor around a fire pit for roasting bananas.

Hale Pahu (drum house) sheltered the great ceremonial drum(s) of the temple. The structure is thatched with hala (pandanus) leaves.

Anu'u has been referred to as the "oracle tower" where the high priest received and proclaimed the answer of the gods to his petitions. This tower was the most distinctive feature of the temples of ruling chiefs.

Ki'i Akua (temple images) symbolized the presence of helpful gods who were ancestral to the worshippers. Carved with great virtuosity, ki'i akua of the distinctive Kona style are regarded as among the finest of all Polynesian art forms.

Lele were tall stands where offerings were presented to the gods.

Hale Nana Mahina'ai (house to see the gardens) is where Kamehameha I ordered the cultivation of the agricultural field named Kuahewa in the uplands of North Kona for sufficient food supply for his people. Kamehameha I would oversee the progress of Kuahewa from this site at Ahu'ena