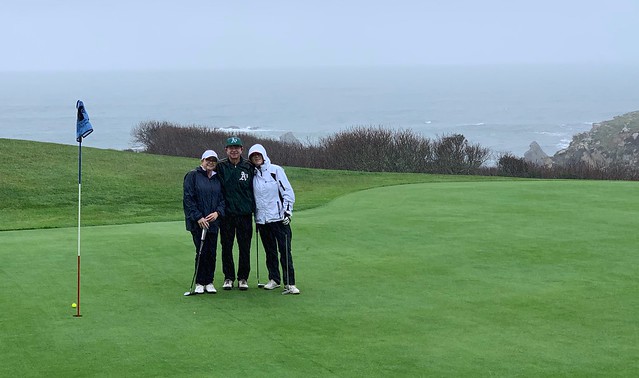 When I got up Saturday morning, it was raining off and on. The plan for the day was golf at the Sea Ranch Golf Links. With the weather looking worse on Sunday, we decided earlier in the week to shift our tee time from Sunday at 10:20 am to Saturday morning. We ended up outsmarting ourselves.

While Phil went out for an early bike ride, Sharon and I hiked south along the bluffs for about 30 minutes When Phil got back, we had breakfast and debated the plan for the day. We ended up deciding to go to the golf course and see how things went.

We ended up playing nine holes. After hitting the ball fairly well on the driving range, I struggled. I ended up shooting a very liberally scored winter rules 58. I will eventually post the scorecard. It stopped raining for a couple of holes early, but then started again. It was muddy and wet. The sixth and ninth holes were particularly soggy. Interestingly, I actually putted pretty well. The less said about the outing the better...

After golf, we made a stop at the Gualala Hotel. The bar and restaurant recently reopened after being closed for a number of years. Sharon went there with the girls years ago, but I don't think that I had ever been inside.

Back at the house, we spent the rest of the afternoon in the hot tub. Although a little small, it was a nice hot tub with a only limited view of the ocean. While I can understand the desire for some privacy, I prefer a set up that takes better advantage of the ocean views.

In the late afternoon, I wandered off north along the bluffs by myself. Sharon, Phil and Marlene caught up with me and the four of us explored Shell Beach before heading back to the house.

We finished the day with dinner back at Gualala Hotel. I started with a bowl of hearty chili [local produced grass-fed Covelo ground beef and kidney beans] that was very good. Sharon and I both had a salmon special which was solid. The four of us shared a bottle of Woodenhead Pinot Noir.

Like Friday night, everyone crashed fairly early. This was partly due to the fact that I screwed up some of my planning for the trip. More on that on Sunday's post...
By Heringer at 1/19/2019 11:59:00 PM