It was odd not to be either on a trip or attending a Frame Family function. It has also been a long time since we haven't gone to Mass on Easter. It didn't really feel like the Easter Holiday. While everyone else slept late, I took Tiber on a long walk in the park.

In the late morning, Sharon, Jack and I did a long hike around the Effie Yeaw Nature Perserve and Ancil Hoffman Park. The county closed the park and the golf course for Easter weekend. As a result, the park was eerily quiet on both Saturday and Sunday. Selfishly, I wouldn't mind them keeping the park closed a little longer. The three of us ended up hiking 4.1 miles in an hour and thirty-three minutes. I will post a map and a couple of pictures later in the week. 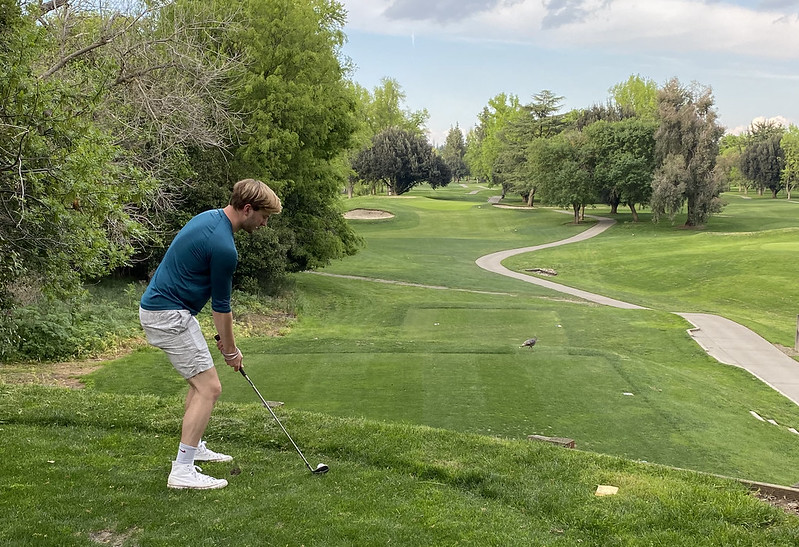 In the late afternoon, Sharon convinced Jack and I to sneak on to the golf course. Grabbing a couple of clubs, we walked down the trail and jumped on the course at the 14th hole. I only took one club: a hybrid 4. Jack carried a driver and a nine iron, while Sharon had a driver and a seven iron. We played 14, 15, 16 and 17. There were a couple of other people out on the course hitting balls.

We then walked back across the course and played the par three 5th hole. Just as we were on the green, we saw the ranger driving down the course saying on the loudspeaker that the course was closed.

Sharon had ordered a ham. Although it was supposed to show up on Friday, it never did. I ended up barbecuing a couple of Omaha Steaks. We finished the day with a nice dinner of steak, au gratin potatoes and green beans. Eating dinner, we watched the second half of Godfather II.
By Heringer at 4/12/2020 11:59:00 PM