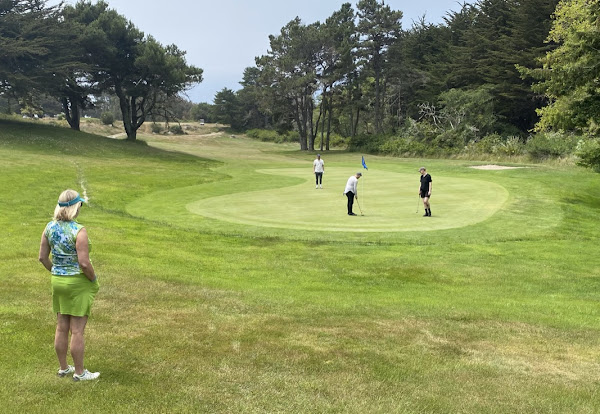 The plan for the morning was golf. We took off from the house about 9:45 am. After hitting a bucket of balls, we had 10:40 and 10:50 tee times. Sharon and I went off first. Jack, Drew and Madi followed. 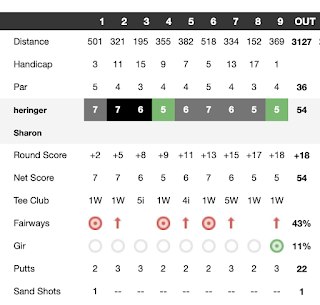 I enjoyed the round a lot. I felt like I struck the ball pretty well. I used a mulligan on the 6th tee. I had to drop on the par three 8th over the gully. I played with the same ball for the rest of the morning. I ended up shooting a fairly accurately scored 54 on the front nine. While I have scored better on the front nine in the past, it was probably not scored as honestly...

Jack, Drew and Madi played best ball. Jack actually got his game going a little and was fairly happy with the round.

It was a fast round. We played nine holes in just over two hours.

Jack, Sharon and I barbecued hot dogs for lunch. Afterwards, Sharon headed into Gualala to shop. While she was gone, I went for a long walk north along the bluffs. I covered just over four miles in an hour and fifteen minutes.

We took everyone to the Vue for dinner. This is the sixth time in the last eighteen months that Sharon and I have had dinner here! The group split a selection of appetizers, including calamari, ceviche and crab din sum. Morgan had the Tipsy Sardinian [fish, prawns served in spicy vodka sauce with sun dried tomatoes and saffron cream linguini]. Sharon and Lee split Fish and Chips. Jack had Linguini Alfredo [White wine, triple cream, pecorino]. I had Braised Short Ribs [Burgundy braised beef short ribs, garlic mash, bacon and seasonal vegetables].

Jack, Sharon and I finished the day watching the Bucks beat the Nets in overtime of the Eastern Conference NBA semi-finals. Afterwards, we watched the first two episodes of season one of Ted Lasso.
By Heringer at 6/19/2021 11:59:00 PM