Up and moving before 7 am, Sharon was chagrined that the hotel didn't serve breakfast on weekends. We ended up walking down Market Street to a Starbucks.

The plan for the morning was hiking the SF Crosstown Trail. We caught an Uber to the Land's End Visitor Center. From there, we hiked along the Coastal Trail. The trail follows the rocky cliffs above the mouth of the Bay. The views include glimpses of the Golden Gate Bridge. We walked through the Sea Cliff neighborhood to Baker Beach. Turning south, we followed a boardwalk trail through the Presidio's sand dunes. Leaving the Presidio, we hiked along the Park Presidio Greenway, a tree-lined trail heading south to Golden Gate Park. We finished in the Rose Garden in Golden Gate Park. We covered just over five miles in two hours and twenty-four minutes.

I was much more impressed with the hike than I expected to be. I will post a map in the next several days. We are already planning to come back this summer and hike the rest of the trail.

Searching for a place to have lunch, we settled on Pacific Catch on 9th Avenue. It was just on the other side of the park. As we walked to the restaurant, I was shocked at the number of cars trying to get into Golden Gate Park.

Sitting at the bar, we had a nice lunch. Sharon had a West Coast Bowl with salmon, while I had a taco platter. After lunch, we caught an Uber back to the hotel.

Dropping our packs in the hotel, we walked to the SVN West event space. This was formerly the Fillmore West and Carousel Ballroom. When we were working in DC and visiting Jack, I had bought tickets for the Van Gogh Immersive Show. I have always been a fan of Van Gogh; we seen several Van Gogh shows and visited the Van Gogh Museum in Amsterdam.

I enjoyed the show. We ended up spending just over an hour. The show is about 35 minutes long and then loops.

Walking to and from the show, it seemed like there were a lot more cops on the street than Friday night. I will have more comments about our experiences in the area around the hotel on Sunday.

We finished the day with dinner at SPQR. This is supposed to be a one star Michelin restaurant. The experience was not good.

We took an Uber to the restaurant. After getting seated, it was more than 35 minutes before anyone came to speak with us. We chose the wine pairing with the fixed menu. Twice during the meal, the course showed up, but we had to wave someone down to get the wine pairing. Additionally, the food came at odd intervals. Sharon was less than impressed by several of the courses, particularly the lemon linguini.

Sharon said "I don't know how this place got a Michelin star..." The menu and wine pairing list are included below.

After dinner, we got another Uber back to the hotel. My experience over the last couple of months is that it takes longer to get an Uber than did before the pandemic and it is more expensive... Back at the hotel, we crashed. 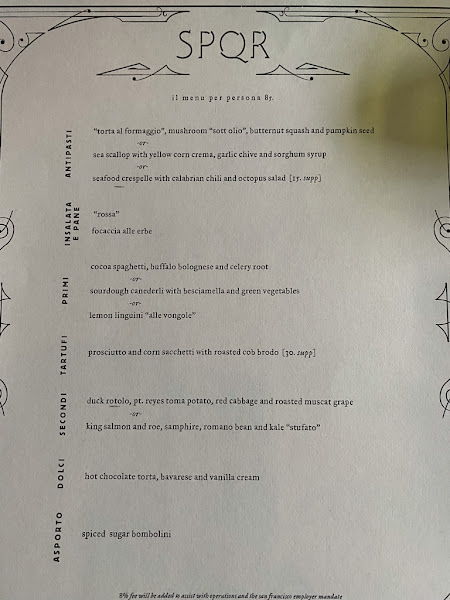 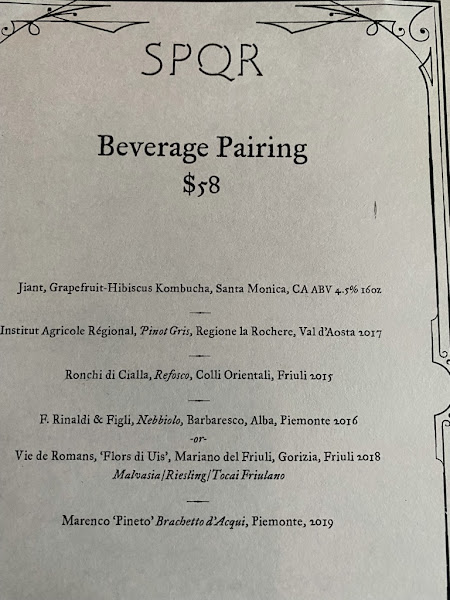