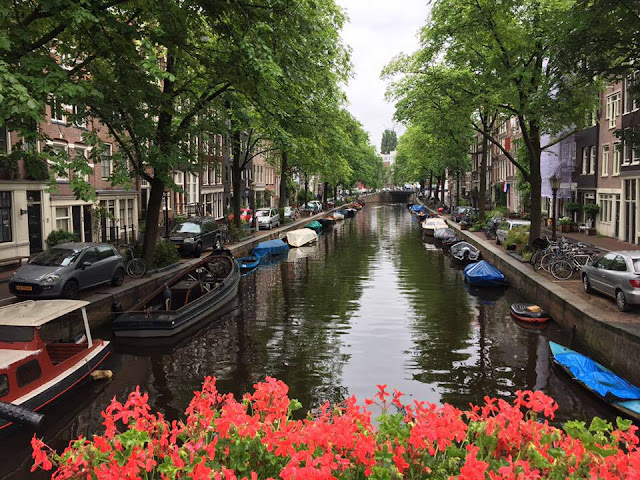 Sharon probably spent more time researching the food in Amsterdam than she has on any trip that I can remember. We ended up having an early breakfast at Pancakes Amsterdam. While Jack and I ordered sweet dutch pancakes, Sharon ordered a savory pancake. All were all excellent. I had strawberries and yogurt. Sharon's pancake was almost like an omelet.

From there, we walked towards the museums. We started with the Van Gogh Museum. Sharon and I had seen several traveling Van Gogh exhibitions in Los Angeles and Denver in 1999 and 2000. Consequently, I was a little disappointed by the breadth of the museum's collection. I was surprised by some of the Japanese style paintings that he had done as well as his sketches. The Tree Roots painting that he was apparently working on at the end of his life was interesting. It took us almost an hour and a half to cover the museum.

The Rijksmuseum was next. This is a Dutch national museum dedicated to arts and history in Amsterdam. It has masterpieces by Rembrandt, Frans Hals, and Johannes Vermeer. I was very surprised by Rembrandt's Night Watch. It is very impressive! We spent another hour and a half exploring this museum.

Done with the two major museums, we wandered to the Leidseplein and made a stop for a cold drink. This marked one end of Rick Steve's walking tour. Eventually, we started back towards the hotel following the walking tour. Sharon enjoyed the flower market along the way.

Afterwards we spent 30 minutes exploring the Amsterdam Museum. This museum focuses on the development of Amsterdam as a city.

We continued along pedestrian shopping mall on the Rick Steve's walk towards Dam Square and then continued up Damrak to the train station. The walk ended very close to our hotel.

After we got back to the hotel, Sharon and I wandered across the street from the hotel to a Spanish tapas restaurant for a snack.

Sharon had a made a late dinner reservation so we decided to stand in line for the Anne Frank Museum. I had tried to buy tickets ahead of time, but they were all sold out. We ended up standing in line for about an hour. It takes about 30 minutes to tour the museum. It was worthwhile. I will probably end up reading the book at some point...

We finished the night with a 9:00 pm. dinner at Balthazars Kejken. The restaurant had a three course fixed menu with a meat and fish main course choice. Jack and I had white fish, while Sharon had rabbit.

By the time we wandered back to the hotel, it was about 11:15 pm. I have been using my iPhone and watch to navigate, but it died shortly after we left the restaurant. As a result, Jack and I took a different way back to the hotel. As Sharon was getting miffed that we had lead her on a wild goose taste, we walked up on the hotel.
By Heringer at 6/26/2016 11:59:00 PM