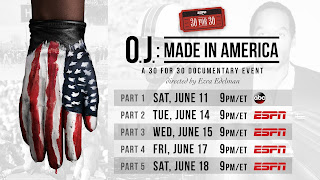 Sharon and I watched O.J.: Made in America, Episode 1. This is the first episode of a five part ten hour miniseries. The miniseries explores O.J.'s life as well as race relations and the cult of celebrity. This is the tenth installment of ESPN's 30 for 30 Volume 3 and the first episodic ESPN 30 for 30 documentary. An episode guide for Vol 3 is here.

Sharon and I were both amazed by the first episode. I didn't realize that Simpson had played for USC in 1967 and 1968. For some reason, I had my timeline wrong and thought he played there later. With Martin Luther King killed in April of 1968 and Bobby Kennedy killed in June of 1968, this is obviously a very tumultuous period.

We are looking forward to the second episode!