We finally landed in Amsterdam a little after 2:00 pm. We breezed through customs and collected our luggage. My biggest surprise was that the taxi was a Tesla. It took about 20 minutes from the airport to our hotel. We are spending three nights at the Amsterdam Renaissance. We actually have two rooms for the first three nights of the trip. We were in our rooms a little after 3:00 pm.

After getting settled in the rooms, Sharon and I spent some time with the concierge trying to figure out how to ship the house key to Eric. Eventually, they sent us to a post office about a quarter of mile away. Unfortunately, the post office couldn't get the key out until Monday. The saga continues...

From there, we walked by the Anne Frank House and the Westerkerk (West Church). Jack wants to come back and climb the bell tower. We found a spot along one of the canals for a cold drink near the Anne Frank house. 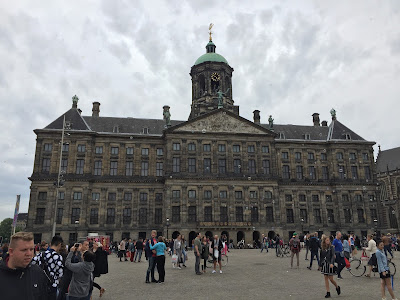 We then walked to Dam Square. The Royal Palace (picture right) is one side of the square. Unfortunately, the palace is closed until July 2 to set up an exhibit. On another side of the square is the New Church. This is now an exhibit hall. We bought museum passes (museum kaart) that we can use for the next couple of days and spent some time browsing the exhibits. We finished the afternoon walking back to the hotel up a busy pedestrian shopping street called Nieuwedijk.

Doing some research ahead of time, Sharon made restaurant reservations for all three nights in Amsterdam. We had an early dinner at bistrot nerf near the hotel. Sharon had veal, while Jack and I had duck breast. Jack and I spilt some very good Irish and Dutch oysters as an appetizer.

Jack and I finished the night in an Irish Pub watching Portugal play Croatia in the round of 16 of the Eurocup. With the score tied 0 to 0 at the end of regular time, Jack and I moved to the hotel lounge to watch the end of the game. In extended time, Portugal won by the score of 1 to 0. By the time, we crawled up to the room it was after 11:30 p.m.

Although we lost four and a half hours to the plane problems in Chicago, it was very successful first day. We had a chance to get our bearings and built a plan of attack for the next two days in Amsterdam.