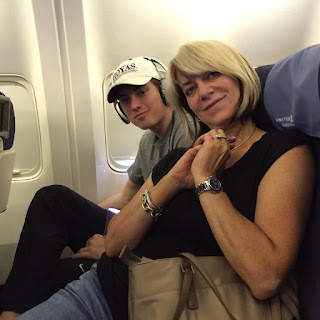 Staying at a Marriott near the San Francisco Airport, we were up about 5:30 am. This turned out to be one of those days when nothing goes quite right. As we were packing up the hotel room, Sharon realized that she had forgotten to give Eric the house key... As a result, we spent most of the rest of the day trying to find somewhere to ship the key back to Eric overnight without success.

We drove from the hotel to the SFO long term parking garage. [Note to Self], we are not paying to park here again. We caught a shuttle to the terminal. Checking our bags and getting boarding passes, the three of us got TSA Pre boarding. We breezed through security. Sharon, Jack and I boarded a 9:20 am United flight to Chicago O'Hare.

The flight to Chicago was easy. Unfortunately, Sharon realized on the flight that she couldn't find her United credit card. She thinks that she put it in her passport after she checked in and then dropped it as we were wandering the SFO terminal looking for somewhere to ship the key to Eric.

Landing at O'Hare about 3:00 pm, we wandered the C gates of Terminal ! trying to find somewhere to get a bite to eat. About 5:00 pm, we boarded a 5:50 pm United flight to Amsterdam. This is where the fun really began.

After taxiing away from the gate and sitting at the tarmac for almost an hour, the captain informed us that they were having problems with the anti-skid brakes. The plane went back to the gate. We ended up sitting at the gate for almost two more hours with little or no information from the crew. Much to my chagrin, the United iPhone app kept sending updated departure time delays to my watch.

Eventually, they took everyone off the plane in order to run some maintenance checks. United said that if they couldn't fix the problem they were going to put us on another plane. Finally, about 10:15 pm, they announced that the problem was resolved. They loaded everyone back on the plane, but had to find a new crew of flight attendants. It was after 11:00 pm before the plane pulled away from the gate again.

Instead of arriving in Amsterdam at 9:20 am in the morning on Saturday, we are now scheduled to be there at 2:00 pm Saturday afternoon. In the twenty plus years that Sharon and I have traveled together, we have one rule: any day that you end up where you were supposed to be is a good day.

I am writing this post over Nova Scotia with five more hours to Amsterdam. The wireless is better on this flight than it was on the flight from San Francisco to Chicago!
By Heringer at 6/24/2016 11:59:00 PM