The hotel had given Sharon directions to three places to have waffles for breakfast. I couldn’t find the first place. It turns out it had moved… We ran across it later in the day on a different square. We ended up having waffles at the Prestige. Apparently, the Belgium’s don't really eat waffles for breakfast. They are more of a desert or a snack.

After breakfast, we walked to the De Halve Maan Brewery and brought tickets for the 11 am tour. With some time to kill, we walked through the Begijnhof and associated church. This is a complex which formerly housed beguines, lay religious women who lived in community without taking vows or retiring from the world.

The three of us took the De Halve Maan Brewery tour. It lasted a little over an hour. Their brands are Zot and Strong Henry. The tour was followed by a tasting.

After a quick stop at the hotel, we headed to the Bell Tower. We hit it just right; there was essentially no line. It is 392 steps to the top. Have I said recently that I am not a heights person... 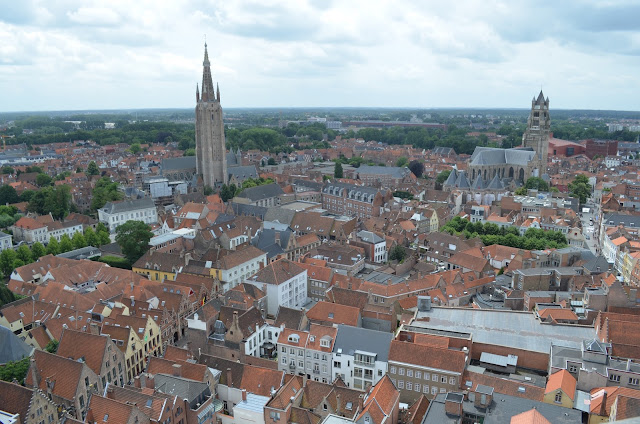 We had a nice lunch in a restaurant on a small square on Simon Stevinplein street. After lunch, we toured the Groeninge Museum. This is a fairly small museum. The most notable piece is Virgin and Child with Canon van der Paele by the early Netherlandish painter Jan van Eyck. The last couple of rooms merit only a speed walk.

Sharon shopped for chocolate in the same small square where we had lunch. We then wandered back to the Beer wall and got a different sampler than on Tuesday. We sat along the canal in the rain. I have been very surprised how much that it has rained on this trip. We have gotten rained on every day!

The package with the home keys finally got delivered to Eric on Wednesday morning his time. While we had a drink in the hotel bar, Sharon spent some time talking to Eric while he was at the house and checking on the cat.

After struggling with the hotel staff to find a restaurant, we ended up just walking into town. We were heading back towards the neighborhood near the brewery. Close to the hotel, we stumbled on a small restaurant called The Habit. It turned out to be a very nice flemish meal. We had a shrimp appetizer. Sharon had rabbit, I had beef stew and Jack had Brugse Waterzeei (chicken cream soup).
By Heringer at 6/29/2016 11:59:00 PM