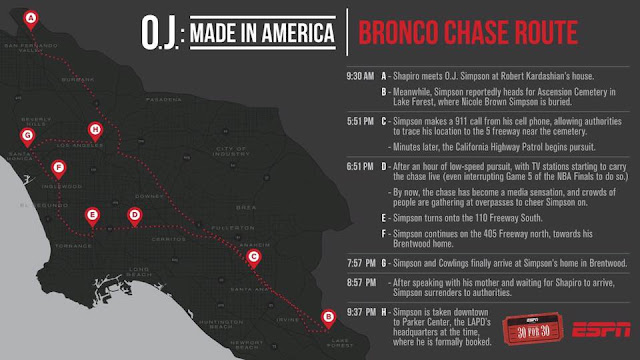 After going to dinner with Liz at Cafe Bernardo to do some trip planning, Sharon and I watched O.J.: Made in America, Episode 3. This is the third episode of a five part ten hour miniseries. The miniseries explores O.J.'s life as well as race relations and the cult of celebrity. This is the tenth installment of ESPN's 30 for 30 Volume 3 and the first episodic ESPN 30 for 30 documentary. An episode guide for Vol 3 is here.

This episode starts with murder of Nicole Simpson and Ron Goldman and ends as O.J's trial for murder is about to start. From the murder scene to the Bronco chase to the personalities of the attorneys, there is a tremendous amount of detail in this episode. Amongst all of this, I was startled by the composition of the jury. The jury included: an African American man; a Hispanic man; eight African American women; and, two Caucasian women. All twelve jurors were democrats and none of them regularly read a newspaper. With the backdrop of the ongoing issues between the black community and the LAPD explored in the first two episodes, it is easy in hindsight to see where the verdict might end up...

Sharon and I are both looking forward to the next two episodes. This is a very well done documentary.