We all slept in until 8 am. This is a moving day... We will be heading to Ghent.

For the second time on the trip, Jack and I went for a morning run. This has been a very unexpected development (pleasure). We did a loop out to the four remaining windmills and back. A map of our run is here. While Jack and I ran, Sharon went to the spa.

After getting cleaned up, we wandered down to the Market Square and had omelettes at one of the restaurants lining the square. Packing up the room and checking out, we caught a taxi to the train station. I was disappointed with how long it took for the taxi to show up. Overall, although we had a great room at the hotel (Dukes Palace), the desk service was at best mediocre.

We caught a 12:37 train to Ghent. It was only a 30 minute train ride to the Ghent St. Peter train station. We caught a taxi to the hotel. We are spending two nights at the Ghent Marriott. This turned out to be a very unusual Marriott right in the middle of the historic city center.

After getting unpack, we headed to the Castle of the Courts. This is castle built in the middle ages. 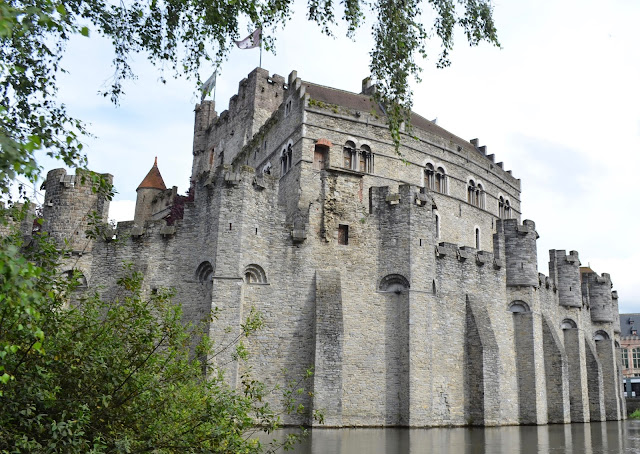 When we finished the castle, we had a snack along the river canal. From there, Jack and Sharon went to the top of the Belfry of Ghent. Having had enough of towers at this point, I toured the St. Nicholas Church.

Meeting back up, we did a 40 minute boat cruise. Compared to Amsterdam and Bruges, the Ghent boat canal tour covers a fairly small area. Interestingly, there was a canal that ran 30 miles to the North Sea at one point. Parts of it are filled in now.

Scouting a place for dinner, we walked through the neighborhood near the castle, but didn't find anything promising. We ended up having dinner at Pakhuis. Sharon found this restaurant in the Rick Steve's book. It was a very cool setting. Jack and I spilt some oysters (not as good as day 1...), while Sharon had smoked eel. For the main course, I had chicken, Jack had ham, and Sharon had salmon. The only shortcoming of the dinner was that my food was not very warm.

After dinner, we headed back to the hotel and watched the Portugal versus Poland Euro2016 soccer game. Portugal won the game on penalties. Jack and I have watched the last two Portugal games and they have been pretty boring. Jack and I wandered around the area to take some night pictures after the game was over. It was after midnight by the time we got to bed.
By Heringer at 6/30/2016 11:59:00 PM