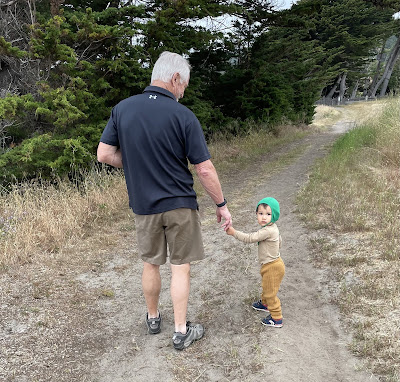 After a couple of late nights, we slept late. Sharon eventually made pancakes and bacon for breakfast.

While Sharon went into town to get steaks for dinner, I went for a long run north along the bluffs. I went 6.25 miles in an hour and seventeen minutes. I ran all the way to Graham View.

When I got back to the house, Drew was there. Eventually, Drew, Jack and I took off for a hike. We hiked across Highway 101 to the Hugal Ravine trail, south on SAG Pond Trail and then back north on the Ridge Trail. We hiked just over three and a half miles in an hour and twenty-three minutes. I will post a map on the near future.

Back at the house we watched the end of the Eastern Conference semi-finals game seven. The Hawks defeated the 76ers by the score of 103 to 96.

At some point earlier in the day, Drew found a copy of the board game Catan. We ended up playing three games in the afternoon and evening with Sharon joining for one game. Drew, Jack and I each ended up winning one game. It is a rarity for me to win.

In the late afternoon, we watched the end of the US Open Golf Tournament. Essentially taking him out of contention, Oosthuizen drove just out of bounds into the canyon left of the 17th fairway for a bogey. Rahm birded the last two holes to give him a 1 shot victory.

Morgan, Daniel and Lee joined us after Lee got up from his nap. Before dinner, a group of us walked out on the bluffs to look for some kayaks that we had seen being carried down to the ocean. I barbecued steaks for an early dinner.

Drew, Jack, Sharon and I watched the end of game one of the Western Conferences finals. The Suns beat the Clippers by the score of 120 to 114.