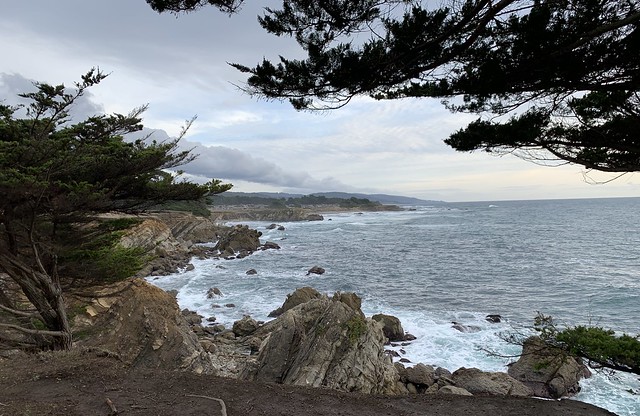 We pulled away from the house about 8:40 am heading to Sonoma. We had debated going through the Anderson Valley like last year, but decided instead to stop in Sonoma at Three Sticks for a wine tasting. Maggie who we met at Donum is now the hospitality manager at Three Sticks. The tasting room is located in the historic Vallejo-Casteñada Adobe in downtown Sonoma.

From there, we headed to Bodega Bay. We stopped at Tides Restaurant to buy some smoked salmon and crabs. We ended up stopping just north of Bodega Bay and eating our lunch in the car.

We pulled into Gualala about 2:45 pm. The traffic was very light all day. After buying a couple of things at the market, we stopped and got the keys.

We were into the house just after 3:00 pm. We are spending three nights at Graham View.

After unloading the car, Sharon and I went for a four mile walk south from the house along the bluffs. As I said to Sharon while we are hiking, I don't know if there is anywhere in the world that you get ten miles of trails along the bluffs like you do at Sea Ranch. We came across a historical marker [The Bane Bill] that I have never seen before and isn't marked on the map that I have.

We barbecued some pork chops for dinner. Sharon had made some sweet potato mash at home. We finished the night watching Parasite on the AppleTV. Parasite is one of the ten 2019 movies nominated for best picture Oscar. My short write-up on the movie is here.
By Heringer at 1/17/2020 11:59:00 PM