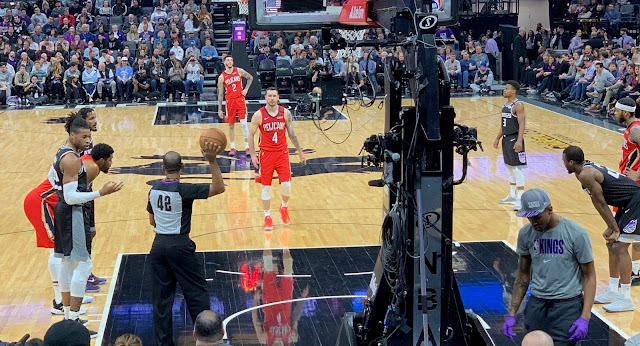 Larkin and I went to the Sacramento Kings versus New Orleans Pelicans NBA game. We bought the tickets with the hope of seeing Zion Williamson play. It looks like he is finally coming to take the court on Monday... Larkin and I were sitting in Section 101, Row DD, Seats 1 and 2.

Trailing for most of the game, Bjelica converted a four point play to tie the game with 4.2 seconds left. Coming out of the ensuring timeout, Ball inbounded to Redick who drove left and banked it in. The Kings lost the game by the score of 117 to 115.

Lonzo Ball was the high scorer for the Pelicans. He has 24 points on 9 for 19 from the field, 4 for 12 from three point range and 2 for 2 from the free throw line. Ball added 6 rebounds and 10 assists.

Kings aren't as much to watch as they were last year. They seem like misfit toys; they don't seem to play together very feel. Given how much time Fox, Bagley and Bogdanovich have missed this season, it is probably not surprising.

The Kings now have one win and three losses in games that I have seen this season. While I thought that they would struggle with a tough Western Conference schedule, I didn't expect them to be this bad.
By Heringer at 1/04/2020 11:59:00 PM