Celebrating My Birthday (2020 Kings versus Mavs)

Sharon, Janie, Larkin, the Sanborns and I started the evening with dinner at Echo & Rig (Sea Bass). We had a nice dinner celebrating my birthday. Sharon got me a jacket and a watch band for my birthday, while Janie gave me a bottle of wine and a cigar.

The group went to the Sacramento Kings versus Dallas Mavericks NBA game. Trailing by 15 points at the beginning of the fourth quarter, the Kings pulled within 3 points in the last minute. The Kings lost the game by the score of 127 to 124. 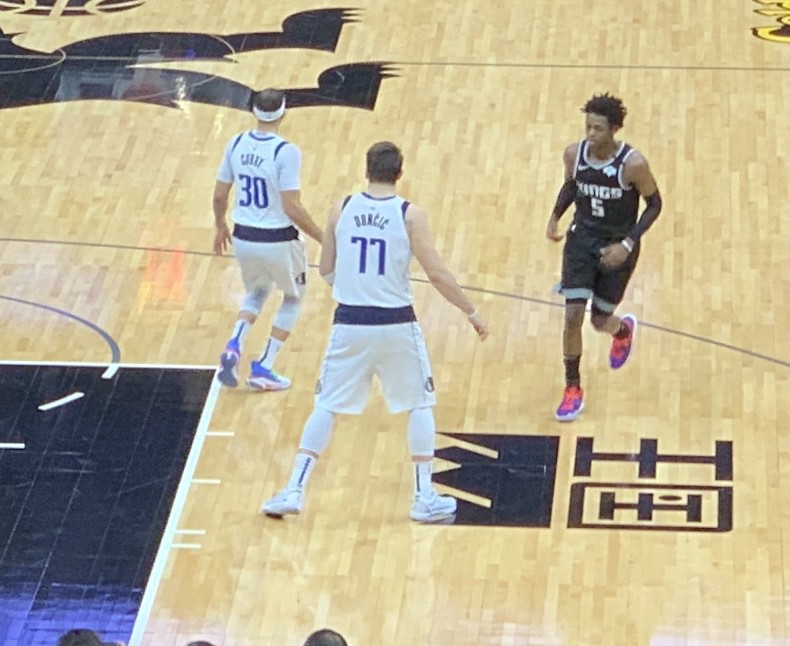 Luka Doncic was the leading scorer for the Mavs. He had 25 points, 15 rebounds and a career-high 17 assists for his NBA-leading 12th triple-double. Doncic was 8 for 18 from the field, 0 for 5 from three and 9 for 10 from the free throw line.

When Doncic was in the game, I watched him rather than following the ball. He is listed at 6'7" and 230 pounds; he looks very big. On defense, Doncic was guarding Harrison Barnes (6'8"- 225 pounds), while Fox (6'3" - 185 pounds) was guarding him much of the night on the offense end. I still don't understand why the Kings passed on drafting him...

The Kings are not very fun to watch at this point. Although the attendance was listed at 17,029, there were lots of empty seats all over the arena.

Email ThisBlogThis!Share to TwitterShare to FacebookShare to Pinterest
Labels: My Birthday