Moving a little earlier than Saturday morning, both Sharon and I went out for short runs. I ran 2.6 miles north of the house along the bluffs. Looking for a historical marker, I took a side trip along the Del Mar Meadow Trail. 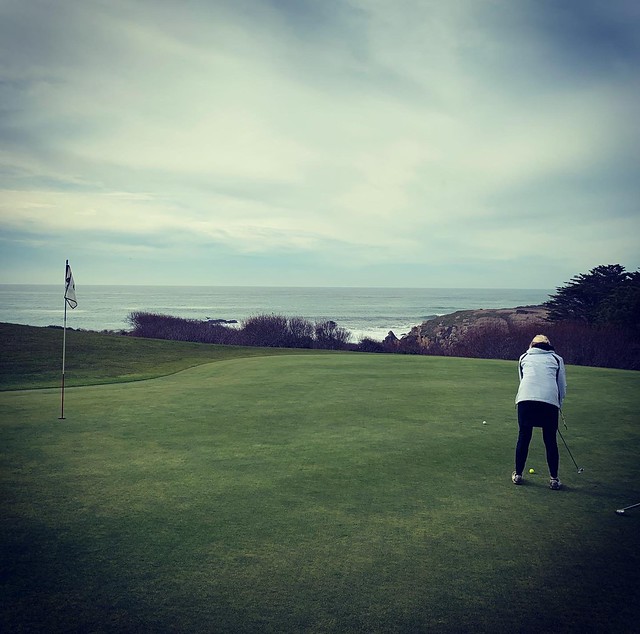 After a smoked salmon omelet for breakfast, we took off for the Sea Ranch Golf Links. We played the front nine. Unlike last year, the weather was nice. I ended up shooting a very liberally scored winter rules 52; my scorecard is here. The par five sixth hole has always been a swamp. After solid first shots, both Sharon and I struggled with our second shots out of the muck. I hit a seven iron into the middle of the green on the par three eighth hole for a nice par. Although I putted pretty well, my chipping was awful...

It took us almost exactly two hours to play nine holes. Although the course was wide open, we ended up coming up on a foursome walking (the men's club?) on the seventh and eighth hole.

After golf, we headed to the Seafood Shack for lunch. This is a new restaurant. We both had an albacore tuna sandwich.

After another quick stop at the Surf Market, we headed back to the Graham View house. After hitting the hot tub and taking a short nap, we watched the San Francisco 49ers play the Green Bay Packers in the NFC Championship game. Leading 27 to 0 at halftime, the 49ers won the game by the score of 37 to 20. Seven years ago, I watched the 49ers beat the Falcons in the NFC Championship game at Sea Ranch.

We had an odd encounter at halftime. Taking the opportunity to go for a short walk along the bluffs, an older couple stopped us just as we were leaving. They had bought the house next store and thought we might be the owners. We ended up walking and talking with them for about 15 minutes. They were cattle ranchers from Colorado who had driven in the night before.

We barbecued steaks and cooked a baked potato for dinner. Sharon and I finished the night watching The Two Popes on Netflix. The film is nominated for three Oscars, including: Best Actor for Jonathan Pryce, Best Supporting Actor for Anthony Hopkins and Best Adapted Screen play.
By Heringer at 1/19/2020 11:59:00 PM