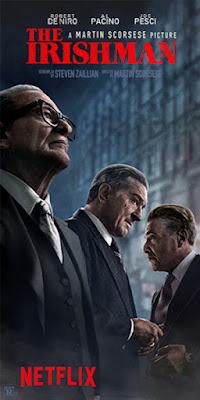 Scenes were filmed with a custom three-camera rig to help facilitate the extensive de-aging digital effects that made De Niro, Pacino, and Pesci appear younger in many of the film's flashbacks. With a production budget of $159 million and a runtime of 209 minutes, it is among the most expensive and longest films of Scorsese's career.

I enjoyed the Irishman more than Sharon. I am fascinated by the fact that it is based on a nonfiction book. At more than 3 1/2 hours, it is very long. We watched about half the movie, stopped and had a leisurely dinner, and then finished the movie. In spite of the length, it never really seemed like it lagged. Unlike Roma last New Year's eve, Tom was even able to stay awake through the whole movie... Although The Irishman currently has the same odds as Once upon a Time in Hollywood to win the Oscar for best picture, I don't think that it will win.
By Heringer at 1/14/2020 05:00:00 AM