We were up and moving fairly early. I actually set an alarm for 7 am. Sharon and I went out for an early morning run/walk North along the bluffs. We covered 3.25 miles in 51:27. We turned around just short of one of my favorite spots without realizing it. 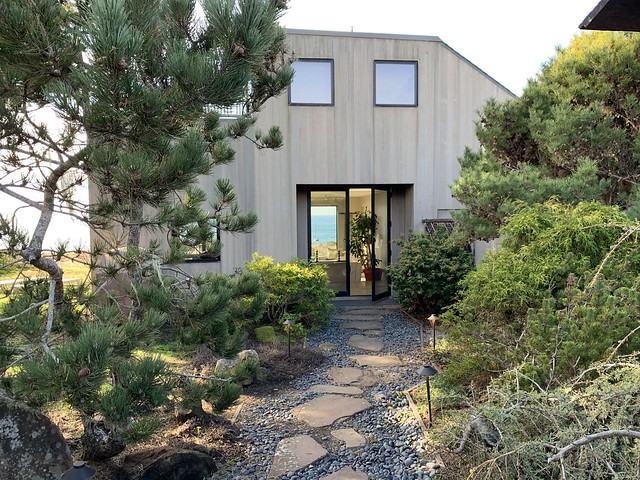 Back at the house, we had smoke salmon omelets for breakfast. Afterwards, we started getting cleaned up and packed up. We were in the car and moving by 10:30 am. We dropped the key and got gas in Gualala.

We had decided to go home via the Anderson Valley. Looking at Waze, we took Mountain View Road from Manchester to Boonville. It cuts 20 miles off the trip, but it is a very winding road. I don't recommend this route.

We stopped for a wine tasting at Domaine Anderson. Looking for one other stop, the woman in the tasting room suggested a sister winery called Roederer Estate. She suggested that it had one of the best views in the valley (it didn't...).

Sharon and I had a late lunch at the Mosswood Market in Boonville. Sharon had a tuna sandwich, while I had a turkey panini.

It was a very, very nice weekend...

One random note. We could see a number of commercial fishing boats during the day and at night. On Friday night, there were several boats with bright lights working the Sea Ranch coast. I don't remember ever seeing this many boats. I am going to have to try and figure out if there was a difference in the season this year.
By Heringer at 1/20/2020 11:59:00 PM