Up early, I had a light breakfast. I spent most of the morning in meetings for work.

In the late morning, Sharon and I took off for Mendocino. The plan for the day was to hike, wander around the town and then have dinner. We haven't been to Mendocino since summer of 1999 when we were at Sea Ranch with Drew, Morgan and Jack. [Note to self], I have got to find some pictures from that 1999 trip. 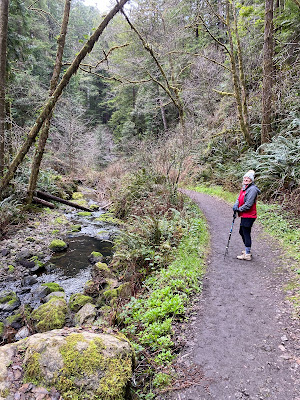 We originally planned to hike the fern trail at Russian Gulch. Googling the park web site in the car, Sharon realized that the trail was closed. We pivoted to the fern trail in the Von Damme State Park south of Mendocino. I had preloaded both trails into the Alltrails app before we left.

We ended up hiking just over five miles in two hours. We stopped and had a late lunch at the half way point. A map is here. It was a nice hike.

Afterwards, we headed in Mendocino and wandered around the town. Sharon shopped in a number of stores. I walked to the Mendocino Presbyterian Church (California Historical Landmark #714). Looking for somewhere to have a glass of wine, we eventually stopped at Patterson's Pub.

We had a dinner reservation at Trillium Cafe and Inn. With it starting to rain, we decided to head south. We ended up stopping for dinner at the Chowder House and Tap Room at the pier in Point Arena. We both had chowder, a ceasar salad and cod fish tacos.

Driving home, Sharon said "I am done with Maui and Mendocino."