When we were planning the trip, Sharon and I talked about playing golf twice: eighteen holes one day and nine holes another. I pestered Larkin in playing with us on Saturday morning before he and Cindy took off.

Larkin, Sharon and I had a 8:30 am tee time. It was cold; the temperature was in the high 30s. After hitting a few balls on the range, we teed off with one group in front of us. I was very happy with how I played. I struggled on the second hole, but parred the par four fourth and ninth holes.

I hit safely over the ravine on the par three eighth. From the back of the white tees, I hit a soft hybrid five to the right of the green.

I ended up with an honestly scored 49. The scorecard is here. I don't believe that I have ever broke 50 on the front nine before. It took us about two hours and ten minutes to play nine holes. 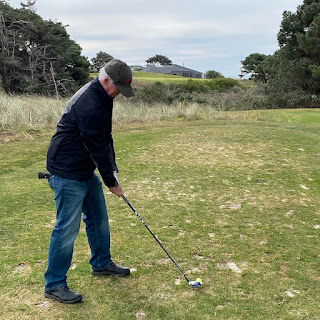 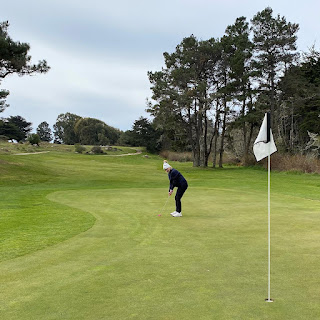 The Larkins packed up their SUV and rolled towards Napa before noon. Sharon and I headed into Gualala. We had lunch at Trinks. Sharon had a BBLT and I had a Turkey Melt. Afterwards, we stopped at surf market and picked up something for dinner.

We had a lazy afternoon. We took a nap. I did a Peleton twenty minute upper body strength workout. Eventually, we walked south on the bluff trail. We looped around the old barn below the lodge and back. As we were just getting back to the house, Sharon spotted a bobcat! I was surprised how big it looked.

We spent some time before dinner making a list of possible trips for the rest of the year. Sharon is focused on Road Scholars and Viking trips.