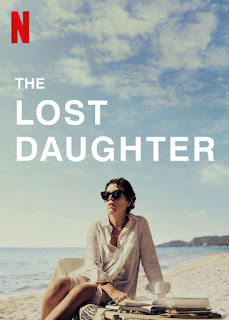 Saturday night, Sharon and I watched The Lost Daughter. This is part of our continuing quest to watch movies that might recieve Oscar nominations. The Goldderby website has Olivia Colman's role in the film as one of the leading contenders for the Best Actress Oscar. The film might also be nominated for Best Adapted Screenplay.

The Lost Daughter is a psychological drama written and directed by Maggie Gyllenhaal in her feature directorial debut. It is based on the novel of the same name by Elena Ferrante.

Colman portrays a college professor on holiday in Italy. Her obsession with a woman, her daughter and a doll prompts memories of her early motherhood.

When it ended, Sharon said "I am not quite sure what to think." Although literally thirty-five minutes shorter than House of Gucci, the movie felt long. I give it a lukewarm thumbs up. Colman and Buckley's performances are very good. I am still rolling the ambiguous ending around in my head...
By Heringer at 2/05/2022 11:59:00 PM