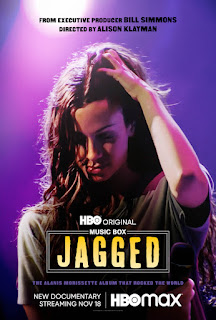 Monday night, Sharon and I watched Jagged on HBOMax. Jagged is a documentary film directed by Alison Klayman. It follows the life and career of musician Alanis Morissette centering on the release of her 1995 album Jagged Little Pill.

Bill Simmons is the executive producer. The documentary was produced by Ringer Films.

The song You Oughta Know from the album is part of the soundtrack of my life. When Alanis Morissette's Jagged Little Pill album was released in June of 1995, Sharon identified with the emotional tone of the album. She found in the lyrics of You Oughta Know an echo of her own feelings about a past relationship. Sharon played the album a lot...

I enjoyed the documentary. Although Alanis participated in the making of the film and sat for hours of interviews, it appears that she wasn't pleased with the end result.
By Heringer at 8/23/2022 05:00:00 AM