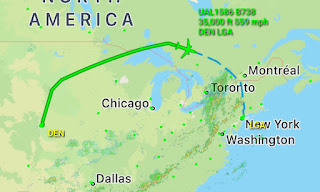 Up at 3 am, Sharon and I rolled to the airport at 3:45 am. Sharon caught a 5:30 am United flight from Sacramento to Chicago. She then took a 9:45 am United flight to New York City's LaGauardia Airport. Using points, Sharon upgraded to first class on both legs.

With storms on the east coast, the flight from Chicago was routed over the Great Lakes and into Canada. Sharon was on the ground in New York about 4:20 pm.

Sharon took a cab into Manhattan. She is spending seven nights at the Westhouse Hotel.

Sharon's brother Tom is showing up tomorrow. He has never been to New York City. They are going to spend six days in the city and then six days in upstate New York.
By Heringer at 8/30/2022 11:58:00 PM