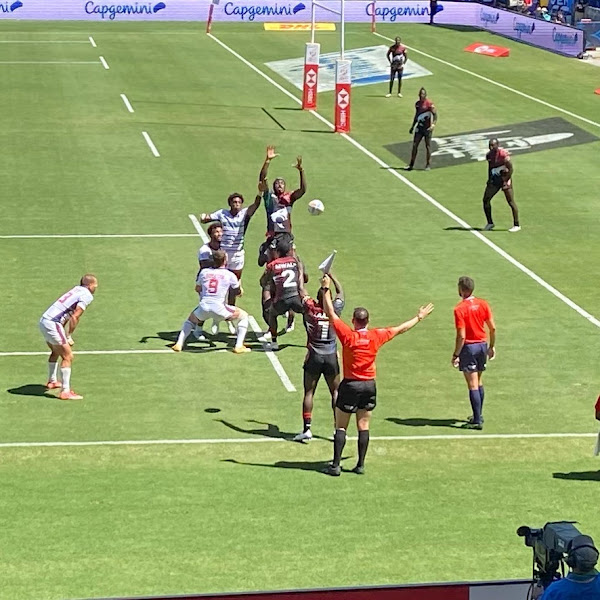 Moving slow after a late night, I willed myself down to the work out room at the Marriott Courtyard. I ran 31 minutes for 2.27 miles on the treadmill.

After getting cleaned up, I headed to Model 6 and picked up Snipes and Tomasin. From there, we headed to Dignity Health Sports Park. USA played South Africa in the first game of the day. USA won by the score of 21 to 7.

In their second game of the day, USA lost to New Zealand by the score of 33 to 12. It was an odd game. Tied 7 to 7 just before half-time, New Zealand scored in extra time before the half and then steamrolled USA in the second half.

USA won their third game. They beat Canada by the score of 26 to 12.

With a record of two wins and a loss, USA qualified for the Cup bracket on Sunday. Tomasin's nephew Steven is captain for the USA team for this tournament. He played all three games. More on Steven in a follow-up post.

It was a long day of watching rugby. There were 24 matches over the course of day.

Heading back to the Model 6, Snipes, Tomasin, Mikey and I ended up walking to the Rockin' Cajun for dinner. I had a cup of Chicken & Sausage Gumbo [Home made stew loaded with chicken, andouille sausage and okra cooked slowly in rich spicy rouxbased chicken stock, served over steaming rice] and Rice Jambalaya [Traditonal New Orleans dish with rice chicken, andouille sausage and shrimp with our cajun spice]. The food was solid. The hurricanes were not.

We finished the day with the nightcap or two in Tomasin's room at Model 6 solving world problems. The Model 6 was not a good hotel; it was dirty and not very well kept up. Tomasin said that it was better several years ago.