I got a long e-mail from Rob Nooter in Tanzania on Sunday night. It included some feedback on the pictures of Dar es Salaam that I had posted.

I looked at the photos you sent, and I would say that they are very representative of the way the city center looks. However, we live (and now I work) on a peninsula north of the city (Msasani Peninsula) which is much more residential and nicer. The city center is congested and a teaming African city. We were there on Saturday to pick up a cushion that Barb had made, and it reminded me that I am glad I am not going down there every day anymore. Traffic gets gridlocked and people drive creatively. 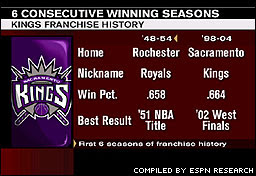 Last Thursday night, I was putting Jack to bed and reading him a couple of books. Sharon was watching the end of the second quarter of the Kings and Lakers game in the bonus room. Jack and I could hear her "commenting" on the game; I found out later that she was voicing her frustration with a couple of missed free throws by Vlade.
Two observations... First, I have mentioned that Jack is a huge basketball fan. This really highlights that he has learned this behavior from Sharon and I; we are both avid vocal Kings fans. Second, the last six years has been a remarkable period for the Kings. During this period, they have won almost 2/3s of their games. As someone who has had ticket packages or season tickets since they came here in 1985, it is hard to explain to Jack that the Kings were not always this good. I keep telling Sharon and Jack that we better enjoy the team while it lasts, just look at the 49ers!
Posted by Heringer at 3/04/2004 11:59:00 AM