Both Wallen and I were up early Sunday morning. We went out for a 45 minutes run that included downtown Tempe and a climb to the top of Hayden Butte.

Wallen's niece Jenny found a place for breakfast in the phone book called Harlow's. It turned out to be a very popular local breakfast place. By the time we finished and were leaving, there was quite a crowd outside waiting for a table.

We checked out of the hotel and headed for Hohokam Stadium to see the Chicago Cubs play the Oakland A's. The Cubs beat the A's by a score of 3 to 2. Zito pitched 5 2/3 innings for the A's and got the loss. 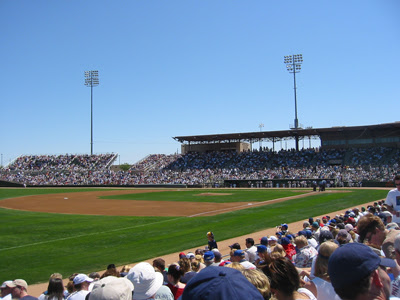 Heading back to the airport with the rental car was an experience. Phoenix's Sky Harbor International Airport has to be the most confusing layout that I have ever seen. We had a difficult time dropping everyone at different terminals and then finding our way to an off-site rental location. As an aside, I also don't recommend renting a Chrysler Pacifica. Riding in the back of the Pacifica was like being in a cave. Additionally, everyone who drove complained about the sightlines.