Wallen snuck out for an early run before 7 a.m. leaving his brother Jim and I asleep in the room. I did not end up getting up until almost 8:30 a.m. While he and Jim went searching for an IHOP, I went out for an hour run by myself. I extended the run from Friday morning. I ended up running for a little over an hour and covering almost 7 miles. By the time, I had a shower and a bite to eat at the hotel, it was time to take off for the game.

We went to Maryvale to see the Brewers play the Marineers. The Milwaukee Brewers beat the Seattle Marineers by a score of 4 to 1. Pineiro pitched six innings for the Marineers and got the loss; he is 0-3 so far in spring training. 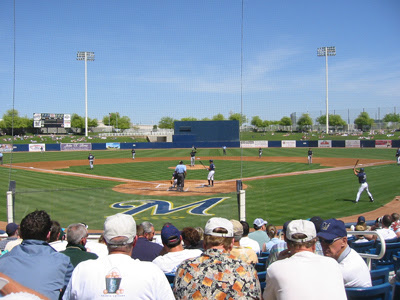 These were the best seats that we had on the trip. We were 13 rows back right behind home plate and about four rows behind the scouts with the radar guns. Wallen thinks that Maryvale is the best of the spring training ball parks. It reminds me a lot of Raley Field in Sacramento; you can stand in the concourse at the concession stands and still see the field. After the game, we headed back to the hotel and spent some time in the pool and the hot tub. I talked part of the group into going to downtown Scottsdale for dinner. It was a zoo with people everywhere. All of the major restaurants along the main drag had at least an hour wait. We wandered a little off the beaten path and the crowds quickly thinned out. We headed up having dinner in a Spanish restaurant called Pepin.