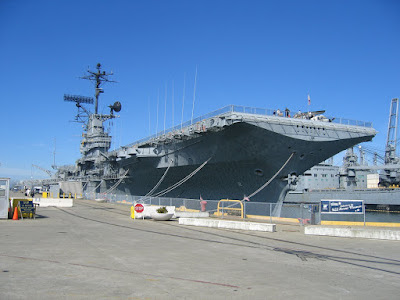 In 1991 the Hornet was designated a National Historic Landmark both for its service in the Pacific in World War II and as the recovery ship for the Apollo 11 and Apollo 12 astronauts. Involved in several of the heaviest and most critical battles in the Pacific, the Hornet earned seven battle stars and a Presidential Unit Citation. The Hornet or its aircrews were responsible for destroying more than 1400 enemy aircraft. After undergoing modernization the ship was called to service in recovering the landing capsules for the Apollo space program. The Apollo 11 mission was the first landing on the moon. The Hornet, with President Nixon on board, picked up astronauts Neil Armstrong, Edwin “Buzz” Aldrin, and Michael Collins from the sea in the summer of 1969, welcoming them to earth from their historic mission. The Hornet recovered the astronauts of Apollo 12 before the carrier was de-commissioned in 1970.

Jack and I stayed overnight on the USS Hornet with his Cub Scout Pack! [Day 1, Day 2 and Photo Album].