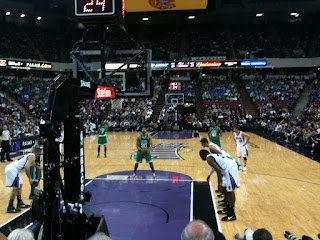 Larkin and I went to the Sacramento Kings versus Boston Celtics NBA Basketball game. With the Kings missing six free throws in the last 1:30, the Kings lost by the score of 95 to 92.

I continue to be dissappointed in Kevin Martin's play.  He had 11 points on 3 for 10 from the field and 0 for 3 from three point range.  Martin did not play in the fourth quarter until the last 15 seconds!

Overall, the Kings were 19 for 30 (63%) from the free throw line.  The Kings poor free throw shooting cost them the game.