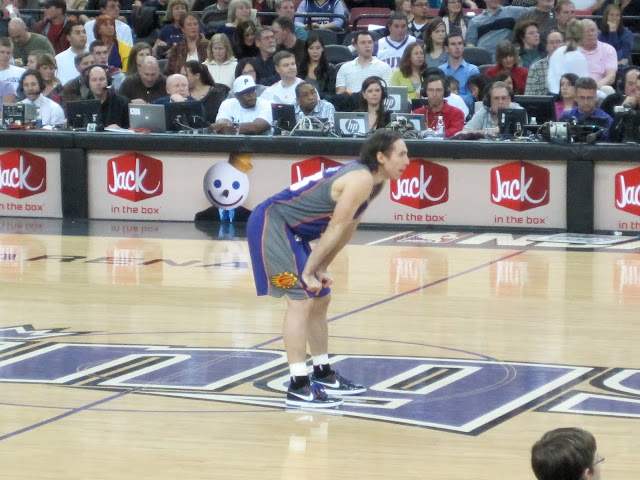 Jack and I went to the Sacramento Kings versus Phoenix Suns NBA Basketball game. Leading by 20 to 30 points for most of the game, the Phoenix Suns won by the score of 114 to 102.

Jack was happy; he is a Steve Nash and Phoenix Suns fan. From my perspective as a Sacramento Kings fan, the game was a mess. The Kings offense looked nonexistent, including no much passing, lots of long shots and players driving 1 on 3 to the basket. The team that I enjoyed watching in the first part of the season is nowhere to be seen.

Donte Green led the Kings with 31 points on 11 for 20 from the field, 1 for 3 from three and 8 for 10 from the line. Unfortunately, none of those points were in the flow of any kind of offense; they were mostly long jumpers or drives to the basket.

I thought the Warrior game was slow and full of fouls, but this game was worse. While Warrior game "featured" 51 fouls, there were 58 fouls tonight. Jack took to calling it a foul-a-rama. The game lasted almost 2 1/2 hours.