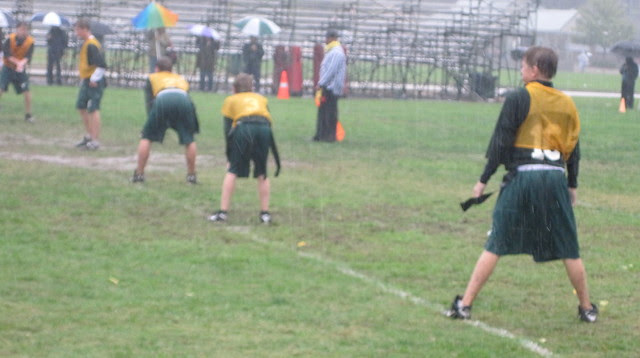 The SEAs Eagles played their sixth game of the 2010 PAL Flag Football season against St. Ignatuis at Jesuit High School. The Eagles faced St. Ignatius in the first game of the season; they lost 20 to 0 in a game that did not count in the standings.

It rained steadily from the time that we showed up on the field to the time we got back to the car.  As a result, it was a sloppy and disjointed game.  The officials called a large number of penalties for pushing people down and grabbing the player rather than the flags.

On offense, Jack played wide receiver. He had two passes thrown in his general direction, but nothing catchable. With the wind, steady rain and the mud, both teams struggled to get their offenses moving.

On defense, Jack played cornerback. I think that he played every play of the game. His highlight for the day was a kick return up the middle for about 25 yards. For second, I thought that he might break it for a touchdown.

The Eagles scored first on the second play of the game. They trailed 10 to 6 at half-time. St. Ignatius intercepted two passes in the second half: one was returned for a touchdown and a second interception set up a touchdown. The final score was St. Ignatius 22, SEAs 6.

The Eagles ended the regular season with a record of 4 wins and 1 loss. They are seeded second in the Central Division and will play the second seed in the Western Division (probably Sacramento Country Day) next Friday afternoon.
By Heringer at 10/24/2010 11:59:00 PM