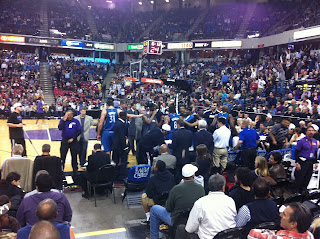 With Sharon holding a jewelry party, Jack and I escaped the house and went to the Sacramento Kings versus Minnesota Timberwolves game. Trailing for most of the game, the Kings could not get on track or stop Michael Beasley. The Kings lost the game by the score of 98 to 89.

Michael Beasley single-handedly beat the Kings. He had 42 points on 17 for 31 from the field, 1 for 2 from three point range and 7 for 10 from the free throw line. Beasley added 9 rebounds. Beasley had 28 points in the first quarter and tied an Arco Arena record for most field goals in a half.

Conversely, Tyreke Evans' performance killed any chance the Kings had of staying close. In 28 minutes, Evans scored 5 points on 1 for 5 from the field, 0 for 2 from the three point range and 3 for 5 from the free throw line. He fouled out of the game with 9:32 left in the fourth quarter.

Westphal is clearly still trying to sort out the rotation. He played all 12 of the Kings players. There just does not seem to be any pattern to his substitutions.

I was disappointed that Cousins only played 15 minutes. In limited minutes Cousins had 7 points and 6 rebounds. It seemed like he was having his way with Darko Milicic.

Jack and I were sitting in section 114, Row A, seat 1 and 2 behind the Timberwolves bench. It felt very odd to see Kurt Rambis, Bill Laimbeer and Reggie Theus coaching the T-Wolves; it just seems like an odd assortment of coaches.