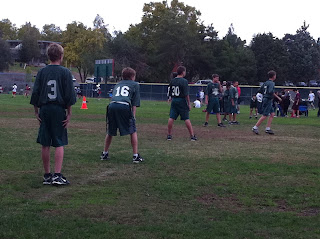 After Jack played two baseball games on Sunday morning, we dashed to Jesuit High School for the PAL flag football play-offs on Sunday afternoon. The SEAs Eagles played their eighth game of the 2010 PAL Flag Football season against St. John Evangelist. This was the semi-final game of the play-offs.  Jack is #16 in the picture at the left.

On offense, Jack was the starting right wide receiver. He had two passes thrown to him. Jack dropped the first pass; he was looking to run before he had the ball. Jack caught the second pass in traffic on a crossing pattern over the middle.

Over the last two weeks, it finally dawned on me why they never threw to Jack much this season. Jack played the right wide receiver. The quarterback was left-handed. The quarterback would always set up scanning the left side of the field and often roll to his left. Almost all of Jack's catches were on crossing patterns with Jack coming across to the left side.

On defense, Jack was the starting linebacker.

The SJE team was very tall. They literally probably averaged 4 to 6 inches taller than the SEAs Eagles. As a result, I was not very optimistic that the Eagles would be able to stay with the SJE team. In spite of the size difference, the score was tied 12 to 12 at half-time. One of the SJE touchdowns came on a long interception return for a touchdown.

Unfortunately, the Eagles got blown out in the second half. SEAs' quarterback threw a second interception for a touchdown. Twice the Eagles got the ball deep in their end of the field, were unable to move the ball and had to punt. This gave SJE good field position and led to two more SJE touchdowns. Another interception set up the final SJE touchdown. SJE beat SEAs by the final score of 38 to 12. SJE advanced to the title game.

All and all, it was a successful season. In the 20 team PAL league, SEAs made it to the semi-final game! I think that it was only the second time in the school's eleven year history that the Eagles have made the play-offs.