Friday turned into a long and busy day... Up early, the Outlaws played the San Diego Scorpions in a 10 a.m. game. The Scorpions had two losses and a tie and I think that the Outlaws took them too lightly.

At the plate, Jack was 0 for 3, reached on an error and scored a run. In his first at bat, he grounded a 1 and 1 pitch to the shortstop and was thrown out at first. Jack hit the first pitch for a chopper down the third base line and was safe at first on an error by the third baseman in his second plate appearance. He stole second and went to third on a balk. Jack scored on Josh's ground rule double to right. In his third at bat, he struck out on three pitches. Jack was so flummoxed by the first two called strikes that he waved at a pitch off the plate for the third strike. 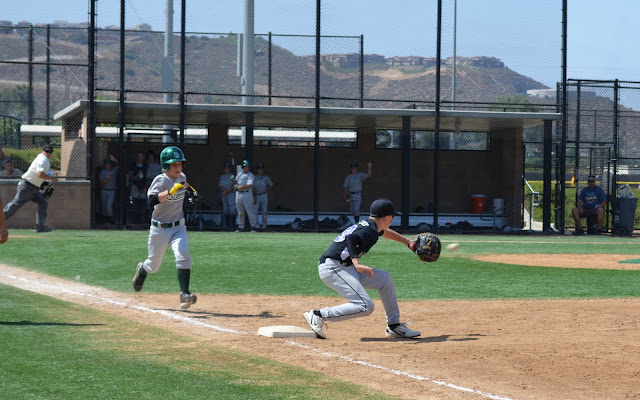 Giving up three runs in the top of the first, the Outlaws ran themselves out of at least a run in the bottom of the first inning by leaving base too early on a sacrifice fly. The Outlaws eventually made the game close, but lost by the score of 6 to 5. The box score is here.

At the end of pool play on Friday, the Outlaws were seeded 9th out of the 18 teams in their division. They play the Diamond Dawgs at 5 p.m. on Saturday afternoon. The loss on Friday didn't effect the seeding that much. If Outlaws had beaten the Scorpions, they would have been seeded 6th and played the 3rd seeded All American Dirtbags. If Outlaws had tied the Scorpions, they would have only climbed to 8th and played the 9th seeded Diamond Dawgs.

After the game, everyone headed back to the hotel to get cleaned up. The plan for the afternoon was to take the team to the beach. The boys had a great time playing in the surf at Mission Beach. 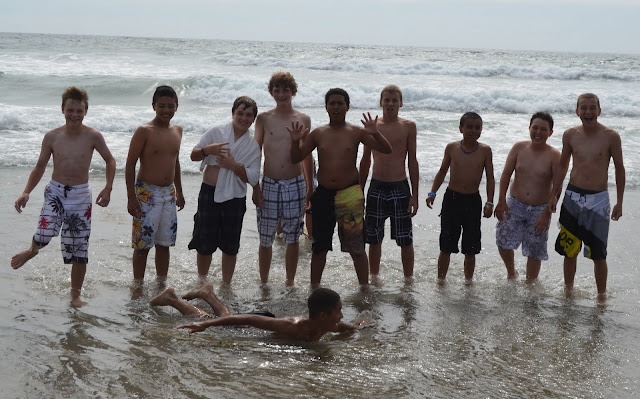 Alan and I bought tickets on Thursday night to take our families to the Padres game. Heading back to the hotel and getting cleaned up, the two families took the trolley from the Fashion Fair Mall to Petco Park downtown. It is a very nice ballpark set in downtown San Diego. We had two sets of seats: 4 in row 18 in section 105 and 3 in row 18 section 107. Putting the three boys in section 107, the adults had a great evening. We spent a couple of innings in the middle of the game upstairs having sushi in a restaurant overlooking the field. 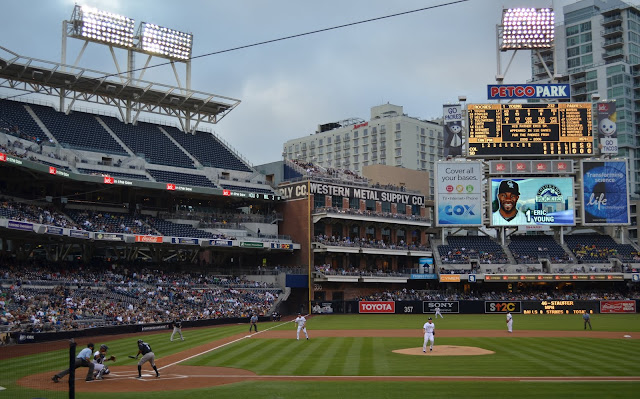 Most of the team ended up going to the game, but Sharon, Patty, Alan and I never ended up connecting with them. The Rockies won the game by the score of 3 to 2.