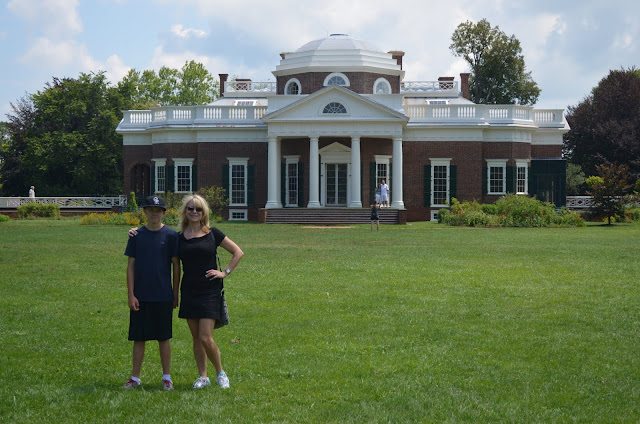 The plan for the day is to visit Monticello. This was Thomas Jefferson's home. I got up before 6:30 a.m., took the Metro to Union Station and picked up a rental car. I headed back to the hotel and scooped up Sharon and Jack.

Monday night, Barb and I had a discussion about the best way to get from Washington D.C. to Monticello. Google Maps had a route charted down I95. Both Barb and Rob felt strongly that it was better to take Highway 66. Luckily, setting the Neverlost in the Hertz rental, it sent us down Highway 66.

It is almost a three hour drive. With a quick stop for coffee and a bite to eat, it was after 11 a.m. by the time we rolled into Monticello.

After the House Tour, we walked down the hillside to the grave site and then to the visitors center for lunch. We took a Behind The Scenes Tour after lunch. This tour is fairly new and covers the second and third floors and then ends up in the basement. I also enjoyed this tour a great deal; I highly recommend it.

We then wandered the gardens for a bit and then caught a shuttle bus back to the visitors center, the gift shop and the car. It was after 4 p.m. by the time we were back on the road.

We decided to try and stop at a Virginia winery on the way back. We ended up finding the Barboursville Winery. Sharon and I tasted quite a few whites and reds that were frankly not very good. There was a Cabernet Franc that Sharon thought was passable, but we did not even consider buying a bottle.

The detour to the winery put us farther east and the GPS routed us home via I95. We were back in Washington D.C. about 7:30 p.m. I dropped Sharon and Jack at the hotel and returned the rental car to Union Station. Walking on to a Metro train, I was back at the hotel a litte after 8 p.m.