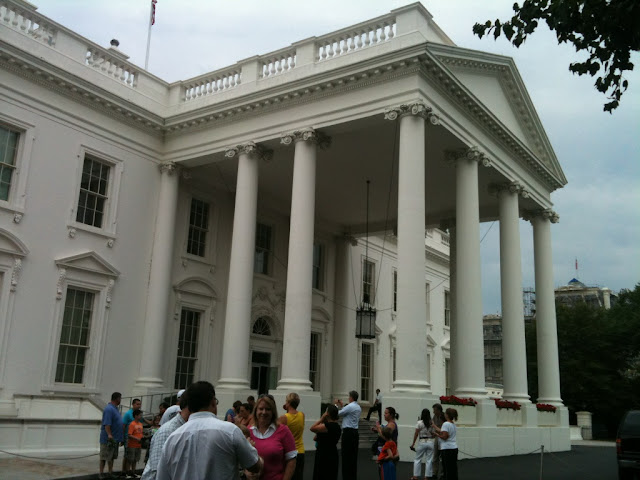 Through our congressman, we were able to get tickets to tour the White House. We were up before 6 a.m. and in line by 7:15 a.m. for a 7:30 a.m. tour. Sharon had talked to a couple of people who had done the tour before and were disappointed. As a result, I went with very low expectations.

I was pleasantly surprised. The tour started in the ground floor going pass the Vermeil and China rooms. It continued up on the State Floor through the East Room, Green Room, Blue Room, Red Room and State Dining Room. You exited through the Entrance and Cross Halls and ended up outside on the North Portico (the front door of the White House).

Afterwards, we walked over and explored the White House Visitor's Center. From there, we made a brief stop at the hotel.

Jumping on the Metro, we headed to the Smithsonian National Air and Space Museum. Visually, there are some neat things, but the exhibits are almost overwhelming; there is so much information. Jack and I rode in a fighter jet simulator with him flying and me serving as the gunner. We had an early lunch and then watched a 3D IMAX film called the Legends of Flight.

After the film, we wandered across the National Mall to the National Gallery of Art. In a little over two hours we covered probably about 75% of the museum focusing on a number of the highlights. I was surprised to find a Hieronymus Bosch: Death and Miser. We had seen Bosch's Garden of Earthly Delights at the Prado last summer. I also tracked down a Picasso that I wanted to see: Family of Saltimbanques. This is one of the major paintings highlighted in the first volume of the Picasso biography that I read. I was also very impressed with Jacques-Louis David's The Emperor Napoleon in His Study.

Taking the Metro back to the hotel, Sharon and Jack relaxed while I ran for 30 minutes and 3 miles on the treadmill.

Jim Ellis, one of Sharon and her brothers' childhood friends, picked us up and drove us to Old Alexandria. We had an Italian dinner at the Landini Brothers. After dinner, we walked along the water front before heading home to crash.
By Heringer at 7/06/2011 08:59:00 AM