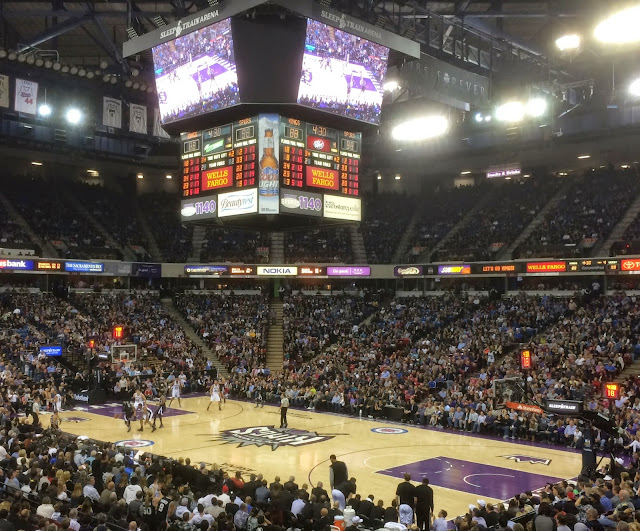 Kurt, Tomasin, Dino, Gene and I went to the Sacramento Kings versus San Antonio Spurs NBA basketball game. After keeping the game close through three quarters, the Kings were outscored 27 to 18 in the fourth quarter and lost by the score of 107 to 96.

With DeMarcus Cousins sidelined with a sprained left ankle and bruised left hip, Ben McLemore was the high scorer for the Kings with 21 points. He was 5 for 8 from the field, 1 for 2 from three point range and 10 for 12 from the free throw line. Ray McCallum had a nice game with 20 points. Rudy Gay did not; he shot 6 for 15 from the field and had eight turnovers!

The Spurs were led by Tony Parker. Parker sparked the decisive run in the fourth quarter and finished with 19 points, five rebounds and four assists.

Dino noted at some point in the game that the Spurs look old.

Hunter and Loren were also at the game. We connected with them at half-time and after the game was over. Loren knew Kawhi Leonard at San Diego State.

We finished the evening at Malabar connecting with another group that included Yuli.

It was great to see Tomasin. I always enjoy his company.