Up surprisingly early, I ran 6 miles on the treadmill and then had breakfast. The TownePlace Suites had a solid complimentary breakfast.

After getting cleaned up, I caught the shuttle back to the airport. I checked my bag for the day at a storage place on the baggage claim level.

There is now a train from SeaTac to the downtown. Finding my way to the train, I rode it to the last stop which is about a block from Wallen's office. After getting a quick tour of his office, Wallen and I walked the mile and a half to the stadium. We met up with his brother Bob who had flown in the morning.

With an early 12:40 first pitch, the stadium was opened at 10:40 am. Bob and I were essentially the first fans on the suite level and found our way to the suite. We took advantage of what the suite had to offer... 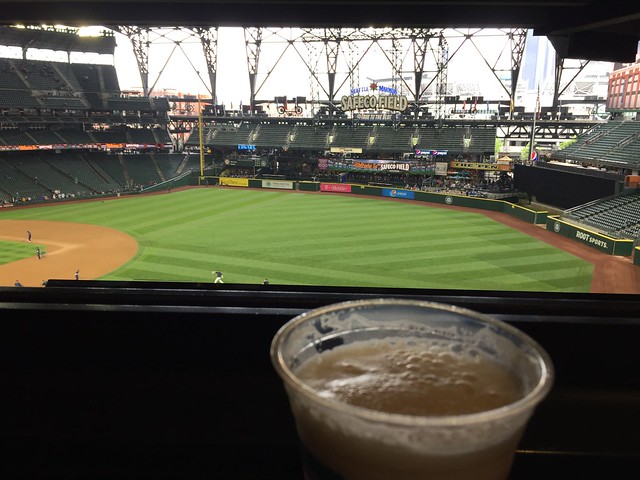 I enjoyed the day a great deal. There was a group of 25 in the suite, including: Wallen, Jill, Nate, Sam, Murphy, Becky, Tal (who I met for the first time), Bob, Jim, Allyn, Bailey, Scott and Gail, Gaston and Vic. I have to admit that I spent a lot more socializing than I did watching the game. 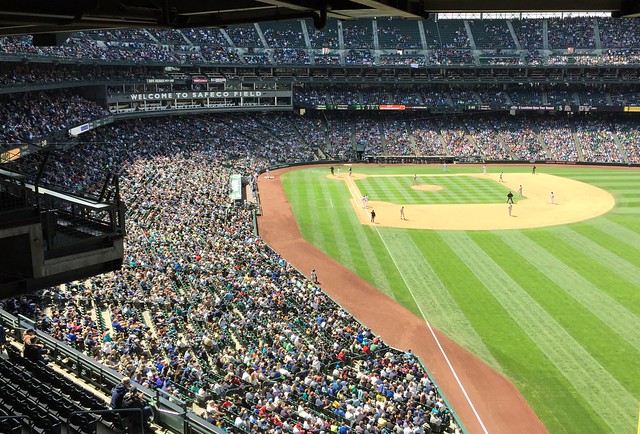 Behind seven strong innings from Tanaka and home runs from Teixeira and Jones, the Yankees beat the Mariners by the score of 3 to 1. Making his first start in more than a month, Tanaka (3-1) was efficient and overpowering. Tanaka struck out a season-high nine and had zero walks.

After the game was over, a group made one more stop near the stadium. About 5:30 pm, I started to wind my way back to the airport. I caught the train back to SacTac, picked up my bag and breezed through security. I caught a 8:10 pm flight back to Sacramento.

Email ThisBlogThis!Share to TwitterShare to FacebookShare to Pinterest
Labels: Wallen