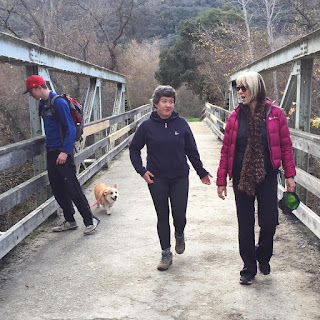 While Jack watched Tottenham beat Watford by the score of 2 to 1, Sharon and I did some of laundry and had breakfast at the hotel. After Jack had some breakfast, we got organized for a hike. The plan for the day was to head out to Garland Ranch Regional Park. This park allows dogs.

On the way, we stopped and got some nice sandwiches at Erik's DeliCafe.

From Inspiration Point, we headed down the sky trail to the mesa trail. We took a side trip to an indian grinding rock and continued up the waterfall trail to a dry seasonal waterfall. We turned around at the base of waterfall and headed back to the visitor center on the lupine loop. 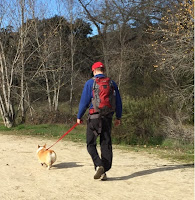 I enjoyed the hike. In spite of the climb, Tiber did great. He was a ball of energy the whole time. A Google Map and views of the hike in Google Earth are here.

After getting cleaned up, Sharon and I headed back to Grasings.

Leaving Tiber with a dog sitter, Jack, Morgan, Sharon and I finished the night with dinner at the Flying Fish Grill. Sharon and I had a great dinner there in July. Morgan had ahi, Jack had seafood pasta and Sharon and I spilt a clay pot. The clay pot was a novelty dinner; it is not something we would do twice. We brought a bottle of Bouchaine Pinot Meunier with us.