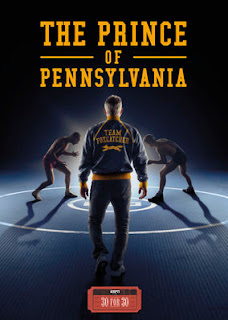 Running on the treadmill at home, I watched The Prince of Pennsylvania. This is the second installment of ESPN's 30 for 30 Volume 3. An episode guide for Vol 3 is here. The documentary looks at the real life events surrounding John du Pont, an eccentric heir to a family fortune with a passion for wrestling, and brothers Mark and Dave Schultz, freestyle Olympic wrestlers.

In the 1980s, du Pont established a wrestling facility at his Foxcatcher Farm after becoming interested in the sport. He became a prominent supporter for amateur sports in the United States and a sponsor for USA Wrestling.

Dave and Mark Schultz both won gold at the 1984 Olympics. The Schultzes were the only brothers to win both World and Olympic championships. The Schultz brothers won more NCAA, U.S. Open, World, and Olympic titles than any American brother combination in history.

Earlier this year, I watched Foxcatcher. Foxcatcher was a Oscar nominated film based on the same story.

The story includes a lot of good interviews and actual footage of the key players and events. While most of the recent 30 for 30s have been two hours, The Prince of Pennsylvania was only an hour long. With a shorter running time, the documentary felt tight and focused. The 30 for 30 is better than the movie, but they are a very nice compliment to each other.