This was the longest driving day of the trip. We set an early alarm and had breakfast in the hotel. By 9:15 am, we were packed, checked out and on the road.

We drove southeast across Southern Germany. The trip took us through a bunch of small towns along the top of Lake Constance. Jack had wanted to have lunch in Litchensutein so he could add another country, but that would have added an hour and a half to two hours to the day. With one stop, we made the drive about 4 1/2 hours.

After two one night stops, we will be spending two nights at Villa Ludwig Suite Hotel in Hohenschwangau. We checked in and dumped our stuff in the room. When we checked in, we arranged with the hotel staff to make reservations for the castle tours. 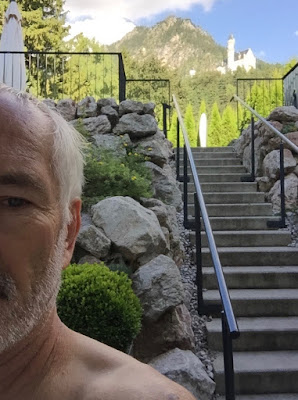 We wandered up into the tourist area below the castles for lunch. Sharon's brother Tom suggested this stop; he and his family had stopped here. It is a major tourist attraction. There were people everywhere. Apparently, a lot of people come on day trip tours from Munich. After getting a bit to eat, we wandered back to the room.

After getting cleaned up, we wandered back up into the tourist area for dinner about 8:15 pm. It was empty... Jack and I had Bauernschmaus, while Sharon had pork and spaetzle,