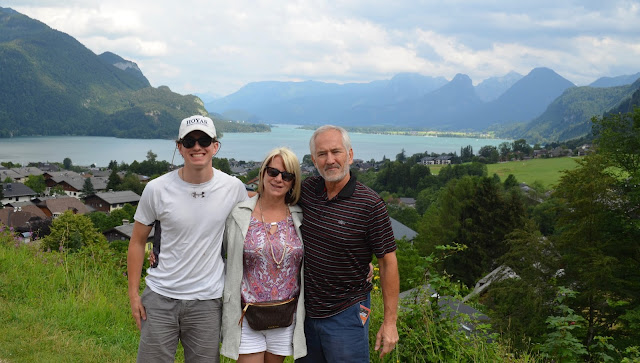 Up early, we had breakfast at the hotel. We were packed, checked out and were loaded in the car by 8:40 am.

We are heading to Salzburg, Austria. For the first hour and a half, the GPS lead us over a series of small country roads through small villages. In the drive from Freiburg to Hohenschwangau to Salzburg, we saw a lot of rural Southern Germany.

Eventually, we hit the autobahn to Salzburg, We got to the hotel about 11:40 am. In heavy traffic, I missed the hotel the first time and it took 20 minutes to loop back around.

We dropped the bags and the car. The hotel said that the room wouldn't be ready until 2:00 pm. This wasn't a problem. Sharon had made plans for the afternoon.

We wandered across the river into the historic old town and had lunch on the Mozartplatz. Sharon had salmon trout, Jack had sausage and I had risotto.

From there, we wandered to Bob's Special Tours. Sharon had made a reservation for a four hour Sound of Music Tour! This was a highlight spotlighted in the Rick Steve's book. Frankly, I didn't even realize that the Sound of Music was filmed in Salzburg.

Let me start with the positives. Both Jack and I felt like the driving tour give us a great feel for the city, the area around the hilltop fortress and the surrounding countryside. We also enjoyed the stop to ride the luge.

Unfortunately, there were a lot of negatives. We were in an eight passenger van. Siding in the middle row, we had a six year old and her grandparents sitting behind us. The tour guide/driver's English was not good. You really had to focus to figure out what the driver was saying. The six year quickly lost interest and was just yapping away about all kinds of things. Her grandparents couldn't hear the guide and got frustrated about where we were going and what we were seeing.

The traffic was very heavy. The driver kept muttering about how usually bad the traffic was. We ended sitting in traffic for much of the first hour trying to get to a number of stops in and around the city.

Over the second half of the tour, we started playing leapfrog with a Panoramic van that was doing the same tour. When we got to the parish church at Mondsee, I followed that group for a while. Their guide spoke great English and was being much more pro-active about actually leading the tour. This was actually the company recommended by the hotel...

What we really needed was a reference sheet and map that supplemented the tour. This would have provided a much better perspective on what was going on.

We got back to the city about 4:00 pm, but it took us almost 30 minutes to wind our way to the hotel in very heavy traffic. I finally convinced Sharon to get out and walk the last 100 yards rather than sit in the van.

We picked up our key and went up to the room. We are spending the next two nights at the Hotel Sacher.

Jack had come on the trip with a cold. Starting Sunday or Monday night, I started to feel it a little. Walking in the room, I essentially collapsed. I couldn't go any further. Sharon and Jack wandered down to the hotel bar, while I slept.

Sharon had made a dinner reservation in the old city center, but she and Jack decided to eat in the hotel grill instead. Jack had more schnitzel, while Sharon and I had hamburgers. Jack spent the last week of the trip raving about how much he loved German food.

Jack and I finished the night in the room watching the second half of the Portugal versus Wales Euro semi-final. We were rooting for Wales, but Portugal won by the score of 2 to 0.
By Heringer at 7/06/2016 11:59:00 PM