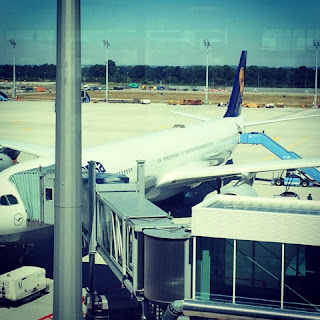 In hindsight, we probably didn't use our time in Munich as efficiently as possible. If Sharon and I had felt better, we could have covered more ground on Friday night and Sunday morning.

We had a lazy Sunday morning. We slept in and had a nice free breakfast in the hotel. We eventually caught a taxi from the hotel to the airport about noon. It is actually a pretty long ride out to the airport. The cab driver was not happy that I used a credit card...

We had a nonstop flight from Munich to San Francisco on Lufthansa. We checked our bags. I swear that Jack's bag was probably more than 55 pounds. I think that Jack's bag only weighted 43 pounds when we started. Sharon and Jack bought quite a bit of swag.

Lufthansa doesn't seem to care about overweight bags. We had a similar experience with Sharon's bag coming out of Italy four years ago.

We breezed through security. With a 3:25 pm boarding time, we had some time to kill. We ended up having a cold drink and some sushi followed by some Italian food.

The boarding was delayed about 45 minutes. In spite of loading a very big plane, Lufthansa didn't seem to have a very organized boarding process...

It was an 11 1/2 hour flight. Jack and I watched Portugal beat France in the Euro final by the score of 1 to 0. We had been hoping that Germany would be in the final. It would have been wild to be on a Lufthansa flight from Munich with a couple hundred Germans watching the game! Although the food was particularly horrible, the flight was uneventful.

We landed at 7:00 pm Sunday evening. We moved through the password control, baggage claim and customs fairly quickly. Jack's girlfriend picked him up at the curb. Sharon and I dragged the luggage on to the parking shuttle and wound our way to the car. By the time, we got home it was almost 11:30 pm. The cold had gotten the best of me and I was done.
By Heringer at 7/10/2016 11:59:00 PM