Up at 7:00 am, we had breakfast at the hotel, we picked up our castle tickets at the front desk just after 8:15 am. It is a steep 2 km hike from the hotel up to the Neuschwanstein Castle. The palace was commissioned by Ludwig II of Bavaria as a retreat and as a homage to Richard Wagner. It serves as the inspiration for Disneyland's Sleeping Beauty Castle.

We had tickets for a 9:40 am tour. It was nice to be there early. The courtyard where you wait for the tour was pretty empty. The tour plus wandering out of the castle took about an hour. It was definitely worth it. There is a bridge across the gorge above the castle, but it was closed.

We walked back down to the village and then up to Hohenschwangau Castle. We wandered around the ground. We had a 11:50 tour of this castle. This is s 19th-century palace built King Maximilian II of Bavaria. While not as impressive as the Neuschwanstein Castle, it was interesting.

After the castle tours, we had a pasta lunch along the shore of the lake. We headed back to the hotel and took a short nap. 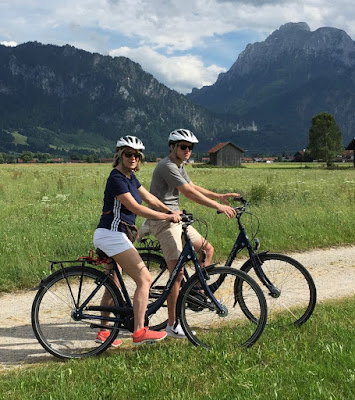 I eventually wandered down to the front desk and got bikes and helmets. We ended up wandering over a fairly large area for more than two hours, including the shore of Lake Forggensee and around Lake Schwansee (Swan Lake). Jack got bored with our pace and took off on his own for the end of the ride. We covered more than 14 miles. Unfortunately, somehow I screwed up and didn't save the map...

After the bike ride, we again spent some time in the hot tub, sweat room and sauna. Both days, it was just the three of us in the spa.

We drove into Fussen for a fairly early dinner. The hotel had made a recommendation, but that restaurant was closed. Wandering into town, we finally settled on Gasthaus Zum Schwanen; this was a German Croatia restaurant. Jack had pork, Sharon had schnitzel and I had sausages.