Forgetting to set any kind of alarm, we all slept really late. It was almost 9:00 am by the time we got up.

Getting cleaned up, we wandered towards the Saint Bavo Cathedral. We had breakfast on the street near the Cathedral (eggs and bacon). Afterwards, we headed into the cathedral.

The church houses the Ghent Altarpiece. The Ghent Altarpiece (also called the Adoration of the Mystic Lamb or The Lamb of God) is a very large and complex early 15th-century Early Flemish panel painting. It is attributed to the van Eyck brothers. It ranks among the most significant works of art in Europe. The altarpiece is another one of the works of art featured in The Monuments Men... There was a good audio tour of the altarpiece. The church also has the Saint Bavo enters the Convent at Ghent by Peter Paul Rubens.

Finishing up touring the church, we did the Rick Steve's walking tour of the historical center of Ghent. After Bruges, I was frankly surprised at how big a city Ghent is.

After the walking tour, we stopped for a snack at a place called the 13 Monkeys. Sharon had frog legs, while Jack had chicken wings.

The plan for the rest of the day was to head to Lille for the Wales versus Belgium Euro soccer game. Originally, I was thinking that we were going to take a train from Ghent to Lille and back. Although Lille is only about 45 miles from Ghent, it turns out that you would have to go to Brussels to get a train to Lille and it would take almost 3 hours one way.

We took off a little before 5:00 pm for the game. It took about 1 1/2 hours to get to the Lille. It turns out that most of the parking requires a reservation?!?. Eventually, we found the only lot that apparently doesn't require a reservation and ended up parking in a walkway on the top floor (there were literally no other spots left).

We walked about a mile to the stadium in the pouring rain. Getting through security and the ticket lines was fairly easy. Sharon felt that the security wasn't tight enough. We grabbed a hot dog before the game. The game had a 9:00 pm kick-off. 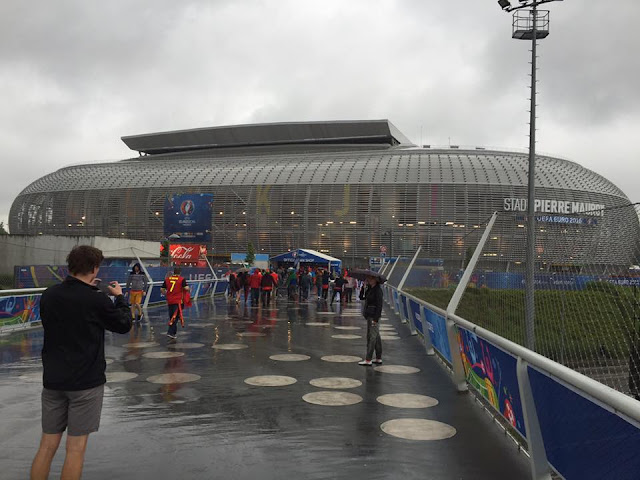 We had great seats about 35 rows up close to midfield. It was a great game. Belgium scored first, but then seemed to sit back. Wales went on to score three goals and win the game by the score of 3 to 1. It was a very, very cool atmosphere. I have to learn the words to a couple of the songs that the Welsh were singing. 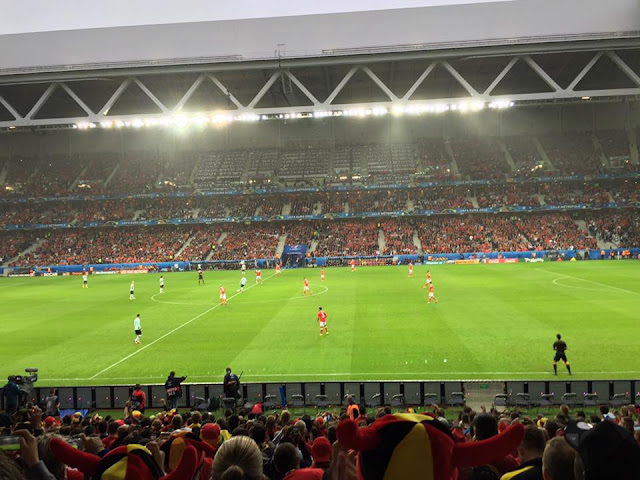 After the game, it took us over an hour to get out of the parking lot. We were back to the hotel in bed at 2:00 am. A very long day...